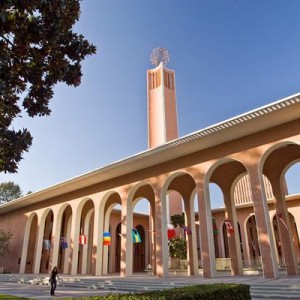 Twelve culturally significant buildings on the USC University Park campus have been named Historic Cultural Monuments by the Los Angeles City Council, joining the university’s oldest building, the 1880 Widney Alumni House, which previously had been given that designation.

Following three public hearings, the buildings were given historic cultural monument status by the city council on Dec. 11.

Brian League, executive director of real estate development for USC, said that when the city prepared the environmental impact report for the latest campus master plan, the 12 buildings were identified as being eligible for historic designation. As a condition of approval for the development agreement, the city required USC to nominate the buildings for the distinction.

Normally, owners request the designation to receive tax credits, League said. Since USC is a nonprofit entity, there is no tax advantage in doing so, which is one reason the university had not previously sought historic status for the buildings.

“We’re happy to have the buildings listed, because they are part of what makes the cultural landscape on campus significant,” League said. The designation does place restrictions on what alterations can be made to the buildings’ exteriors, he said, which is an important way to protect their architectural significance for the future.

The buildings, from oldest to newest, are:

* Dosan Ahn Chang Ho Family Home — An example of American Foursquare architecture built as a single-family home, circa 1920. It was moved to its present location on West 34th Street in 2004, and houses the Korean Studies Institute.

* Bovard Administration Building (1921) — The Italian Romanesque Revival structure that houses the office of the president and other top administrators, as well as the 1,200-seat Bovard Auditorium. Architectural details include a tower with eight stone figures designed by artist Casper Gruenfeld that represent the “Progress of Civilization.”

* Mudd Hall of Philosophy (1929) – This Romanesque Revival building has three wings surrounding a courtyard with an arched colonnade. Decorative stone gargoyles include one of Diogenes with his lamp, looking for an honest man.

* Doheny Memorial Library (1932) – This graceful brick and limestone building was designed by Ralph Adams Cram and Samuel Lunden and is one of USC’s most recognized structures.

* Olin Hall of Engineering (1963) – One of a complex of four buildings designed by William Pereira & Associates representing the New Formalism style.

* University Religious Center (1965) – Designed by Killingsworth, Brady & Associates, a firm known for its work on three Case Study homes. The post and beam structure is an example of midcentury modern and International styles. It is the headquarters for the USC Office of Religious Life.

* Von KleinSmid Center (1966) — Named for the university’s fifth president, Rufus B. von KleinSmid, this complex was designed by Edward Durell Stone in the New Formalism style. Prominent features are its arcade with 10 arches and a tower topped with a globe.

A gallery of the 13 USC buildings now listed as Historic Cultural Monuments is here.