A USC study shows that Americans are more inclined to attend events at arenas and convention centers with counterterrorism or anti-crime security measures despite sacrificing convenience and privacy. 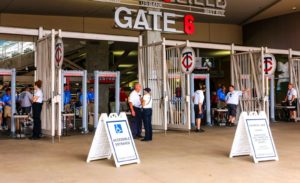 In the 19 years that have passed since Sept. 11, 2001, Americans have seen significant increases in counterterrorism security in public venues, including more security guards, closed-circuit TV cameras, metal detectors and bag checks.

Businesses and federal officials have often wondered: Do these measures deter patrons and result in any economic losses for these venues? Or have Americans grown accustomed to them?

Researchers at the USC Center for Risk and Economic Analysis of Terrorism Events (CREATE) decided to find out by conducting surveys of patrons of events, or those who thought of attending, at the following three venues: a Major League Baseball stadium, an arena that hosts National Basketball Association games and National Hockey League matches, and a metropolitan area convention center.

To project the economic impact of counterterrorism security measures, the researchers included responses from a representative sample of 1,276 adults who had attended or intended to attend an event at either of those venues in the past four years or sometime in the near future.

“Our study indicates that terrorism countermeasures actually resulted in higher attendance at public venues such as stadiums, arenas and convention centers,” said Adam Rose, a study team leader who is the director of CREATE and a research professor at the USC Price School of Public Policy. “This results in a sizeable increase in revenues at these types of sites, ranging from 8 to 59%, and a significant increase in activity for the surrounding economy, though it is relatively small in percentage terms.”

CREATE recently submitted the findings in a report to the U.S. Department of Homeland Security’s Cybersecurity and Infrastructure Security Agency (CISA). The report (findings are here and here) predates the coronavirus pandemic, which has forced venues to halt public events.

Since 9/11, and particularly following the numerous lone-wolf type attacks in the past several years, the public appears to have adapted to the increased security deployed at public venues, said Rose and co-author Richard John, a CREATE associate director specializing in risk perception.

To visit public venues today, Americans face even more measures due to the pandemic, such as wearing masks, social distancing and temperature checks. However, Rose and John said it may take time for some patrons to accept those measures.

The findings indicate that American adults in the surveys view countermeasures such as closed-circuit TV, the addition of security or law enforcement officers, metal detectors and bag-checks as effective for improving safety and reducing risk of crime and terrorism.

Countermeasures were unlikely to deter patrons from considering attending a future event.  A vast majority of them also expressed a desire to attend either the same or a greater number of events with enhanced security and countermeasures.

The venues host markedly different events in different regions of the United States.

“Beliefs, attitudes, and intentions to attend events employing security measures are consistent across the three venues,” said John, also a professor of psychology at the USC Dornsife College of Letters, Arts and Sciences. “The similarity of these response patterns suggests that our findings are generalizable across a broad range of public assembly venues in the U.S.”

Security a plus for attendance

Patrons, on average, indicated a willingness to attend more events at the local venues following the installation of additional counterterrorism measures, which would result in an increase in their revenues from ticket sales.

Ticket sales and attendance increases also matter because they translate into additional direct and indirect spending on goods and services at businesses throughout the area.

Between 18% to 33% of respondents in the public assembly venue study said counterterrorism measures like closed-circuit TV and law enforcement patrols, metal detectors at entrances and bag inspections would increase their likelihood of attending events at the venues. Only a very small percentage — 3% — said such security measures dampened the likelihood that they would attend an event.

Some customers said that they would be willing to pay more than $5 to attend events to cover additional measures to increase security.

An increase in security measures means there are tradeoffs for patrons— such as a loss of privacy and time waiting in lines for events.

“Customers’ willingness to pay demonstrates a very slight sensitivity to inconvenience due to wait time increases,” John said. At the same time, “their willingness to pay is completely insensitive to changes in privacy invasiveness and constant across whether the reduction in risk is for crime or for terrorism.”

Other authors of the study were Dan Wei, Jonathan Eyer, and Katie Byrd, also of CREATE.

Rose noted that the methods the research team used for this study could be applied to analyze the economic impact of recent measures that were implemented to reduce the spread of COVID-19.

USC CREATE, which is affiliated with the USC Price School of Public Policy and USC Viterbi School of Engineering, was the first of now several research centers in various academic disciplines that the U.S. Department of Homeland Security helped establish in the wake of the terrorist attacks on Sept. 11, 2001.