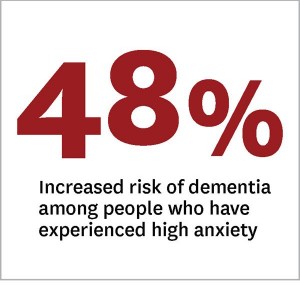 Many studies have focused on a link between depression and dementia, but the USC-led study of Swedish twins data indicates that anxiety may be much more significant factor in memory loss.

People who experienced high anxiety any time in their lives had a 48 percent higher risk of developing dementia compared to those who had not, according to a new study led by USC researchers.

The findings were based on an examination of 28 years of data from the Swedish Adoption Twin Study of Aging, overseen by the Karolinska Institutet of Sweden. The study sample involved 1,082 participants – twins, fraternal and identical – who completed in-person tests every three years, answered several questionnaires and were screened for dementia throughout the study.

Many other studies have explored the link between dementia and psychological variables such as depression and neuroticism. However, this study established that the anxiety-dementia link was independent of the role of depression as a risk factor.

“Anxiety, especially in older adults, has been relatively understudied compared to depression,” said Andrew Petkus, the study’s lead author and postdoctoral research associate of psychology in the USC Dornsife College of Letters, Arts and Sciences. “Depression seems more evident in adulthood, but it’s usually episodic. Anxiety, though, tends to be a chronic lifelong problem, and that’s why people tend to write off anxiety as part of someone’s personality.”

A final draft of the study was made available online last week in Alzheimer’s & Dementia: The Journal of the Alzheimer’s Association.

The researchers noted that the subjects had self-reported various levels of anxiety, which may or may not meet the clinical diagnostic threshold of a psychiatric anxiety disorder. Even so, the twin who developed dementia had a history of higher levels of anxiety compared to the twin who did not develop dementia.

The subjects with anxiety who later developed dementia “are people that experience more than usual symptoms of anxiety,” said study co-author Margaret Gatz, a professor of psychology in the USC Dornsife College of Letters, Arts and Sciences, who holds joint appointments in the USC Davis School of Gerontology and the Keck School of Medicine of USC.

“They are people who you would say operate at a ‘high level of anxiety,’” said Gatz, also a foreign adjunct professor for the Karolinska Insitutet. She said they are fidgety. “They are frantic, frazzled people.”

Petkus said people who have high levels of anxiety tend to have higher levels of stress hormones, including cortisol. Evidence shows that chronically high levels of cortisol damage parts of the brain such as the hippocampus, which stores memory, and the frontal cortex, which is responsible for high-level thinking.

The USC team also hopes to determine whether individuals who have been treated for anxiety earlier in their lives show lower risk of dementia compared with those whose anxiety was not treated.

Other study co-authors were: Chandra Reynolds of UC Riverside; Julie Loebach Wetherell of the VA San Diego Healthcare System and UC San Diego; William Kremen of UC San Diego and and the VA Center of Excellence for Stress and Mental Health; and Nancy Pedersen of the Karolinska Institutet and an adjunct professor of psychology at USC Dornsife.

The Swedish Twin Registry overseen by the Karolinska Institutet is one of the largest databases in the world, and has been the basis for more than 30 research projects and hundreds of publications related to aging and disease. The Swedish Adoption Twin Study of Aging is funded by grants by the MacArthur Foundation Research Network on Successful Aging, the Swedish Council for Working Life and Social Research, and the Swedish Research Council.

The journal Alzheimer’s & Dementia focuses on the scientific, medical and practical care issues for researchers and practitioners. Coverage extends from healthy brain aging to all forms of dementia and includes original peer-reviewed articles detailing clinical research advances as well as conference reports and abstracts. Specific areas of coverage include developments in early detection, intervention, prevention, and application of new technologies in health services.

Aging and the various diseases and conditions associated with it, including Alzheimer’s and dementia, are among the intractable problems that USC researchers in multiple disciplines are seeking to unravel.

Efforts to understand Alzheimer’s and dementia and to find preventive interventions and precise treatments are much more pressing as the baby boomer generation ages. The USC Schaeffer Center for Health Policy and Economics predicts the number of U.S. patients diagnosed with Alzheimer’s will more than double to 9.1 million in the next 35 years. By then, total care costs will top $1.5 trillion.

A copy of the full study is available upon request.