At many universities, Black males are more likely to graduate if they’re not players.

A new report from USC finds that while Black men make up over half of student-athletes on scholarship, they comprise just 2.4 percent of undergraduates at Power Five athletic conference universities.

“If you’re a Black man, you have a better chance of graduating if you don’t play,” said Harper, Provost Professor in the USC Rossier School of Education and USC Marshall School of Business at the University of Southern California. “Young Black athletes are seduced by prospects of full-ride scholarships and the chance to go pro. But graduation rates expose the ‘athlete advantage’ myth.”

Harper, a nationally recognized leader in the research of diversity, inclusion and equity in U.S. higher education, has been studying racial imbalance at athletic powerhouse universities for over a decade.

“What I still find shocking is that these trends are so pervasive, yet institutional leaders, the NCAA and athletics conference commissioners have not done more in response to them,” said Harper.

Harper’s research goes beyond basketball and football, and includes Black male scholarship athletes on all sports teams. He analyzed data from the NCAA Federal Graduation Rates Database, along with each institution’s federal graduation rates. Four cohorts were examined.

At 59 percent of the universities studied, those athletes were less likely to graduate than Black males not involved in intercollegiate athletics.

The statistics from the Power Five conferences – ACC, Big Ten, Big 12, Pac 12, and SEC – show enduring inequities in six-year graduation rates, along with incremental progress at some programs. Among the findings:

By exposing the issue of ethnic imbalance, Harper hopes to inspire administrators to hold themselves accountable.

“When we did our first report six years ago, we hoped this would be a wake-up call that would lead to change,” Harper said. “Yet these inequities still persist. While there has been a slight increase in graduation rates, there are still durable inequities.” 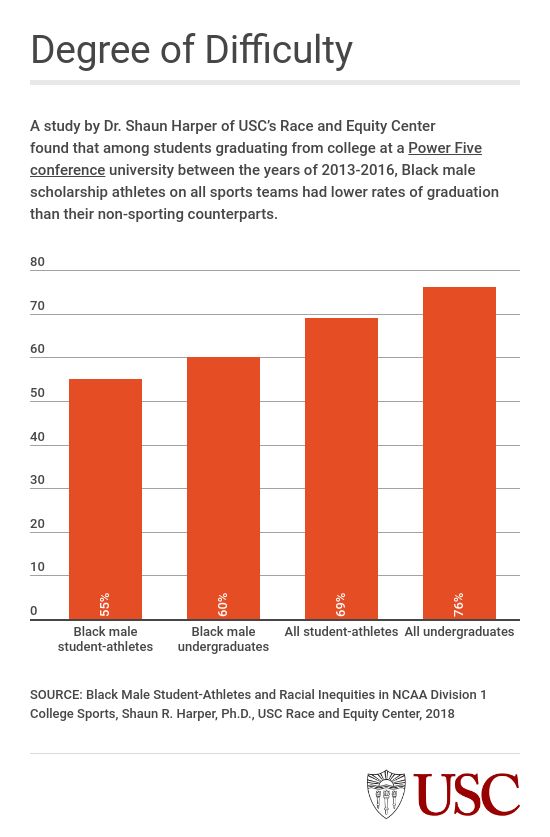