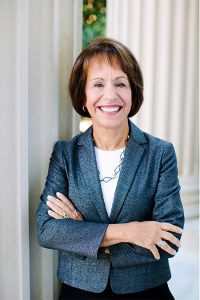 USC Board of Trustees selects internationally recognized biologist and former University of North Carolina at Chapel Hill chancellor to lead the university into new era.

Formerly chancellor of the University of North Carolina at Chapel Hill, Folt brings decades of experience in academia to USC, launching a new era for the 139-year-old university. She will take office as USC’s new president on July 1.

The first woman to lead UNC, she was known for advancing student access and affordability, promoting research, discovery and academic excellence at the university, and steering the campus toward greater accountability.

“As I have come to know Dr. Folt and how she thinks, it is clear that USC has chosen a brilliant, principled leader with clarity of purpose and integrity to lead the university forward and upward,” said Rick Caruso, chair of the USC Board of Trustees. “Ours was a global search, and we spoke to over a hundred diverse and world-class candidates. Dr. Folt stood out from the very beginning as a courageous and compassionate person who always places the well-being of students, faculty, staff and patients at the heart of all she does.

“She has a deep appreciation for the breadth and depth of USC’s mission, and I’m confident she will further strengthen the academic and athletic programs, professional schools and health sciences. Her experience, energy and dedication to these essential elements of USC are needed now more than ever. She is the right leader at the right time. She is a remarkable and accomplished woman.”

Folt was the unanimous choice of USC’s 23-member Presidential Search Advisory Committee. The group presented Folt as a candidate after a seven-month national search shaped by the input of hundreds of USC faculty and staff members, students, alumni and other members of the Trojan Family.

She will assume leadership of the university from interim President Wanda Austin, an alumna and member of the USC Board of Trustees who has led USC since August 2018. Austin also served on the Presidential Search Advisory Committee. Folt will continue work begun under Austin to promote positive cultural change and uphold the highest values of excellence, integrity and trust across USC.

“Dr. Folt is a seasoned leader who has an excellent track record of listening to others,” Austin said. “She clearly understands the value of reaching out across campus, and for standing strong for the character and principles of a university’s community. Her experience gives me great confidence that she will uphold a culture of integrity at USC.”

The search committee praised Folt’s broad-ranging academic experience and commitment to putting students at the center of her mission. During her time at UNC, the diversity of students grew and 20 percent of UNC students were in the first generation of their family to attend college. The university also attracted its most academically accomplished classes ever.

She developed the university’s first strategic plan and spearheaded a $4.25 billion fundraising campaign. UNC surpassed $1 billion in annual federal research expenditures for the first time in 2017. Folt also oversaw one of the nation’s top medical schools and served on the board of UNC’s integrated health care system. At the same time, she spearheaded new environmental sustainability initiatives, entrepreneurship across campus and an expansive effort to make the arts accessible to everyone at the university.

“Carol Folt’s entire career, as both a faculty member and leader, embodies a commitment to all aspects of academic excellence while always putting people first,” said Yaniv Bar-Cohen, president of the USC Academic Senate and professor of clinical pediatrics and medicine at the Keck School of Medicine of USC. “The search committee set out to find the very best leader for where our institution wants to go, and I believe we found the perfect match.”

Folt has deep experience leading a university through challenging times. When she became chancellor of UNC in 2013, she inherited a university grappling with highly publicized past academic and athletic irregularities. One of her first actions was co-commissioning an independent investigation to fully understand the scope of the issue, and she oversaw the implementation of more than 70 reforms — designed together with the faculty — to ensure the highest standards of accountability and integrity across the university.

At the same time, in partnership with the UNC Board of Trustees, faculty, staff and students, she drove critical conversations about race, appointed a special assistant to the chancellor to focus on diversity and inclusion, and completed the removal of a Confederate monument from campus. As colleges nationwide grappled with sexual violence, Folt strengthened the university’s policies on sexual assault and spoke out strongly on the topic on panels at the White House and other universities.

“USC is a world-class global research university, and I am deeply grateful to the USC community and its leaders for giving me the privilege of serving as its president,” Folt said. “The lifeblood of every great university is its students, faculty, staff and alumni, and I am so looking forward to meeting with you and learning more about you. The opportunities and potential I see ahead for USC are extraordinary.

“Of course, I also am aware that our community is deeply troubled by a number of immediate challenges. I assure you that we will meet these challenges together, directly, decisively and with honesty and candor. This is a moment of responsibility and opportunity, and we will seize them both.”

Folt is no stranger to California. A native of Akron, Ohio, she headed west for college and attended the University of California, Santa Barbara, after transferring from Santa Barbara City College. She earned a degree in aquatic biology and a master’s in biology two years later, while working as a waitress to fund her education. Later, she obtained her doctorate in ecology at the University of California, Davis, and did postdoctoral work at the W.K. Kellogg Biological Station of Michigan State University.

She began her career as a professor at Dartmouth College, where she was a faculty member in biological sciences and an academic leader — including as dean of faculty, provost and interim president. Folt’s research has focused on the effects of dietary mercury and arsenic on human and ecosystem health, salmonid fisheries management and restoration, and global climate change. She is a fellow of the American Association for the Advancement of Science.

Folt is married to David Peart, an emeritus professor of biological sciences at Dartmouth. They have two adult children, Noah and Tessa.