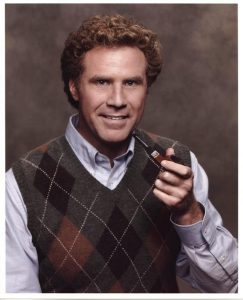 Actor, producer, internet pioneer and prominent member of the Trojan Family returns to his ‘old school’ to regale this year’s graduating class.

More than 60,000 members of the Trojan Family will unite on the University Park Campus for USC’s 134th commencement ceremony on May 12.

USC alumnus Will Ferrell, an Emmy- and Tony-nominated actor and a recipient of the Mark Twain Prize for American Humor, will deliver the commencement address.

Ferrell has earned accolades across multiple entertainment platforms as he crossed over from television to motion pictures, the internet and the Broadway stage.

He has starred in, written and produced many films, including “Get Hard,” “Elf,” “Old School” and “Anchorman: The Legend of Ron Burgundy.”

Among his many iconic impressions on “Saturday Night Live” were “Jeopardy!” host Alex Trebek, the “Inside the Actors Studio” host James Lipton and President George W. Bush. The latter led to the Broadway debut of his one-man comedy show, “Will Ferrell: You’re Welcome America. A Final Night With George W. Bush.” The show earned nominations for a Tony Award and Emmy Award.

Ferrell received Golden Globe nominations for his roles in a remake of “The Producers” and “Stranger Than Fiction.”

In 2007, Ferrell and his longtime collaborator Adam McKay took comedy online by founding the award-winning video website Funny Or Die. The site averages over 20 million unique visitors per month.

In a testament to his impact on comedy, Ferrell was named the recipient of the 2011 Mark Twain Prize for American Humor. Past recipients of the award were Richard Pryor, George Carlin, Lily Tomlin, Neil Simon and Carol Burnett.

Ferrell has also become known for his philanthropy, including his support of Cancer for College, an organization that gives college scholarships to cancer survivors.

Ferrell, a 1990 graduate of the USC Annenberg School for Communication and Journalism with a degree in sports information, has returned often to USC to support the Trojan Family. He hosted the USC School of Cinematic Arts’ 75th Anniversary Gala and has appeared as a guest drum major for the Trojan Marching Band. He participated in “Swim With Mike” for the Physically Challenged Athletes Scholarship Fund and was the keynote speaker for the Lloyd Greif Center for Entrepreneurial Studies discussion series.

Approximately 15,000 degrees will be conferred during USC’s commencement this year, including more than 1,500 doctorate degrees, at the main ceremony in Alumni Park and satellite ceremonies across the University Park and Health Sciences campuses.

Degree candidates, Half Century Trojans, faculty and distinguished guests will form a procession leaving Bovard Auditorium at 8:30 a.m. on May 12. USC President C. L. Max Nikias will preside over the main ceremony at 9 a.m. in Alumni Park.

Image courtesy of Will Ferrell