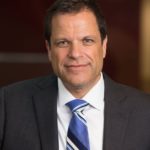 Dana Goldman, a Distinguished Professor of Public Policy, Pharmacy, and Economics, has been appointed dean of the USC Sol Price School of Public Policy. He will hold the C. Erwin and Ione L. Piper Dean’s Chair.

“Dana Goldman has led the USC Price School through a tumultuous year with vision, creativity and caring, and I am delighted he has been appointed dean,” President Carol L. Folt said. “His collaborative approach to research inspired innovative new policies in a number of critical areas, including health care. He will continue to work closely with the entire USC Price community to help bring about meaningful change in sustainability, health, social justice, planning and administration.”

Goldman has directed the USC Schaeffer Center for Health Policy and Economics for 12 years. The center’s research has guided policy discussions on Medicare reform, the Affordable Care Act, Alzheimer’s disease and dementia, and health disparities.

“Dana Goldman has a comprehensive understanding of the excellence of the research and teaching at USC Price, one of the nation’s premier policy schools,” said Provost Charles F. Zukoski. “We are excited to see the school continue under his bold and dynamic leadership.”

Founded in 1929, USC Price brings research from a broad range of disciplines to bear on pressing public policy and governance issues. The USC Schaeffer Center is but one area of renown within the school, which has leading programs in urban policy, nonprofit management and health policy and management.

Goldman sees USC Price as a place where research from across the university can be transmitted into policies that affect the way people live.

“The Price School is about translating research into action to address some of the most fundamental social challenges,” Goldman said. “Doing so requires us to collaborate with scholars throughout the university and to reach a broad audience.”

In writings and interviews, Goldman has pointed to practical ways that medicine can be more effective and just. He has advocated for a shift in the way Americans are screened for cancer and a more robust use of data science in combating COVID-19.

“We develop evidence-based policy based on the scientific research and send that forward into the wider world to address the challenges we’re facing now,” Goldman said.

Goldman was part of an academic leadership group that recently announced the Executive Program in Global Space and Defense, a partnership between USC Price, the USC Viterbi School of Engineering and the Missile Defense Advocacy Alliance.

Prior to coming to USC, Goldman was an economist and director of health economics, finance and organization with the Rand Corporation for 15 years. Goldman has advised the Congressional Budget Office, served as a fellow with the Brookings Institution and worked as a researcher with the National Bureau of Economic Research.

“For those who want to affect the real world, we are a hub,” Goldman said. “That’s why our mission is broad: to improve the quality of life of people in communities globally because policy touches all.”