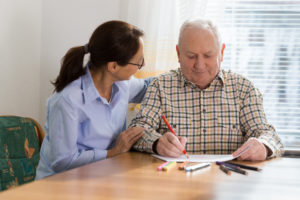 Researchers found the use of dementia specialty care is particularly low for Hispanics and Asians.

In the first large study to examine the diagnosis of dementia in older Americans over time, researchers found the vast majority never meet with a dementia specialist and are instead overwhelmingly diagnosed and cared for by non-specialists.

Researchers at USC, Johns Hopkins and the University of Washington used Medicare data to track dementia diagnoses of nearly a quarter of a million people over five years. The team found 85% of individuals first diagnosed with dementia were diagnosed by a non-dementia specialist physician, usually a primary care doctor, and an “unspecified dementia” diagnosis was common.

“Dementia specialists are more familiar with subtypes of dementia and may be less likely, for example, to misdiagnose Lewy body dementia as Alzheimer’s disease and wrongly prescribe antipsychotic medications to patients,” said co-author Julie Zissimopoulos, director of the Aging and Cognition program at the USC Schaeffer Center for Health Policy & Economics.

Differences in diagnosis and follow-up care

Using a large Medicare dataset, researchers examined the types of physicians that diagnose dementia, what dementia subtype diagnoses were initially provided and how they changed over time, the extent to which individuals accessed specialty care and how it varied by gender, race and ethnicity.

“Without identification of dementia type, patients and their families are potentially missing out on important discussions about care and managing this diagnosis with other chronic conditions, as well as information about clinical trials,” Zissimopoulos explained.

The research team said more study is needed to identify factors driving these differences, such as severity at diagnosis, complexity of the care and barriers or differences in seeking care from specialists.

The importance of dementia subtypes

There are many different types of dementia, including Alzheimer’s disease, vascular dementia and frontotemporal dementia. Study authors say that more accurate identification of dementia type may lead to better treatment for symptoms, enhance knowledge of medications that may worsen symptoms, inform disease progression over time and encourage advance care planning.

Identifying dementia subtypes can also assist in developing and evaluating new drugs and gaining access to effective treatments when they become available.

“While the study shows that specialists seem to be able to identify the subtype better, what we’re really interested in is whether that leads to better health and financial outcomes,” Zissimopoulos said. “If in the future these diagnoses are going to be handled in large part by non-dementia specialists, they may need better training and tools.”

The toll of Alzheimer’s disease and other dementias is high and rapidly growing as the population ages. Dementia affects approximately 7 million America and is projected to grow to nearly 12 million over the next 20 years, driven by an aging population and increased life expectancy. The research team pointed to a recent Alzheimer’s Association survey that found only half of seniors are being assessed for dementia despite the fact that screenings are now reimbursable services.

The researchers note that low rates of dementia specialist care are consistent with recent findings about regional U.S. neurologist shortages.

The study authors explain that their results don’t answer the question of whether or not increasing use of dementia specialist health care should be a policy goal. They say use of specialist services may increase health care costs and, without enough evidence that they improve health outcomes, they may not be a cost-effective approach to dementia care.

“Non-specialists and specialists may be complementary in dementia diagnosis and care,” Zissimopoulos said. “General practioners and other nondementia specialists play an important role in screening because often they are the first point of contact, while specialists are key to making finer distinctions across dementia subtype.”

The researchers say the study’s findings will aid in efforts to improve diagnosis — especially among patients and families not receiving timely post-diagnostic care or dementia specialist care — and inform efforts to better target resources to physicians and improve the preparation necessary to link patients to appropriate new treatments as they become available.

Additional study authors include Emmanuel Fulgence Drabo with the Bloomberg School of Public Health at Johns Hopkins; Douglas Barthold with the Department of Pharmacy at the University of Washington, Seattle; Geoffrey Joyce and Patricia Ferido with the USC Schaeffer Center for Health Policy & Economics and Helena Chang Chui with the Keck School of Medicine of USC.

The study was supported by National Institutes of Health awards R01AG055401, P30AG043073 and NIH/NHLBI grants R01HL126804 and R01HL130462, grant 1R34AG049652 from the University of Southern California Zumberge Research Fund, and the Schaeffer-Amgen Fellowship Program.