The findings suggest that further tightening of air quality standards could potentially reduce the risk of dementia in older populations. 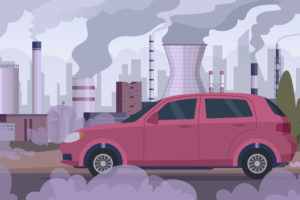 Researchers looked at fine particle pollution and found that breathing in high levels of this kind of air pollution was linked to shrinkage in the areas of the brain vulnerable to Alzheimer’s disease. The findings suggest that further tightening of air quality standards could potentially reduce the risk of dementia in older populations.

The research appears today, Nov. 18, 2020, in the online issue of Neurology, the medical journal of the American Academy of Neurology.

Fine particle pollution, or PM2.5, consists of microscopic particles of chemicals, car exhaust, smoke, dust and other pollutants suspended in the air. The particles are 30 times smaller than the width of a human hair. When breathed in, they can reach deep into the lungs and enter the bloodstream.

“Over the last few years, the clinical neurology community has recognized late-life exposure to fine particles as an environmental risk factor for dementias including Alzheimer’s disease, but whether air pollution alters different brain structures that may increase an individual’s dementia risk is still being researched,” said lead author Diana Younan, a senior research associate in the department of preventive medicine at the Keck School of Medicine of USC. “Our study found that women in their 70s and 80s who were exposed to higher levels of PM2.5 outdoors were more likely to have the pattern of brain atrophy that would increase their risk for Alzheimer’s disease over five years.”

USC researchers have been closely investigating the link between air pollution, memory, depressive symptoms and Alzheimer’s as part of ongoing research. In 2017, USC researchers found clear evidence of brain damage in animals exposed to very tiny components of PM2.5 particles, which may easily and directly invade the brain, possibly bypassing its protective blood-brain barrier. A study earlier this year found that, among women in their 70s and 80s, fine particle pollution was associated with physical brain changes and that those changes were then connected to declines in memory.

Researchers used a machine learning tool to measure signs of Alzheimer’s disease in the brain. The tool had been trained to identify patterns of brain shrinkage specific to an increased risk of Alzheimer’s by reading brain scans of Alzheimer’s patients from the Alzheimer’s Disease Neuroimaging Initiative.

Participants’ MRI brain scans at the start of the study and at five years later were assigned scores based on how similar they were to Alzheimer’s disease patterns identified by the machine learning tool. The tool specifically looked for changes in the brain regions that are vulnerable to Alzheimer’s. Scores ranged from 0 to 1, with higher scores showing more brain changes. Overall, the women’s scores changed from an average of 0.28 at the start of the study to an average of 0.44 five years later.

For each 3-microgram increase in air pollution exposure levels, researchers found a 0.03-point increase in these brain shrinkage scores, that may increase their Alzheimer’s disease risk by 24% over five years.

The increases remained the same even after the scientists adjusted for age, education, employment, cardiovascular disease, high blood pressure, physical activity and other factors that could affect brain shrinkage.

“Our findings have important public health implications because not only did we find brain shrinkage in women exposed to the highest levels of PM2.5 pollution but we also found it in women exposed to levels lower than those that the EPA considers safe,” said Younan. “While more research is needed, federal efforts to tighten the air pollution exposure standards in the future may help reduce the risk of Alzheimer’s in our older populations.”
Limitations of the study include that it only looked at the brains of older women, so results may not be the same for men or younger women.