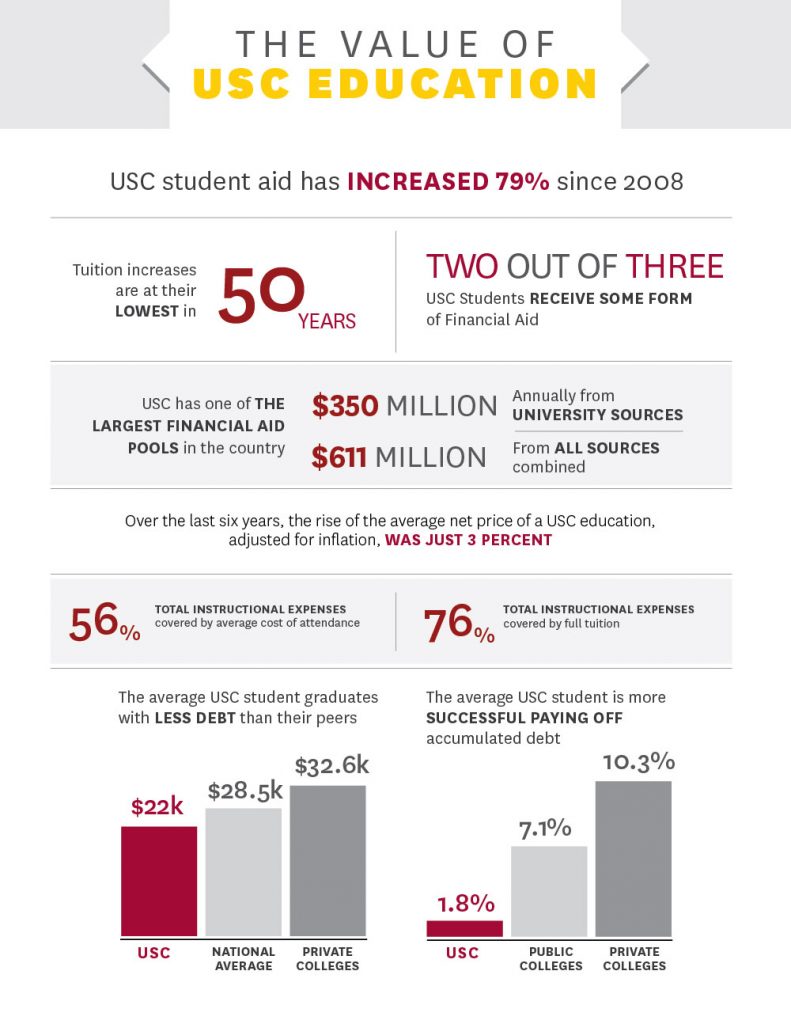 The USC Board of Trustees approved a 3.5 percent increase in undergraduate tuition for the 2019-20 academic year, while reaffirming its commitment to providing financial assistance to two-thirds of students.

The increase is one of the lowest in five decades.

USC has held annual tuition increases below 5 percent for a decade. Over the past six years, the increase in the average net price of a USC education, adjusted for inflation, was just 3 percent.

“The value of a USC degree keeps getting stronger,” said Provost Michael W. Quick. “By keeping tuition increases low and boosting financial assistance, we are providing a world-class education to a diverse and talented student body who will go on to be the next generation of leaders. We are proud of the education and the opportunities we provide to our students, and that will continue.”

USC holds one of the largest financial aid programs in the country, with more than $350 million awarded last year from all USC sources. Since 2008, USC student financial aid has increased 79 percent, far outpacing tuition increases. Two out of three USC students receive some form of financial assistance.

The six-year graduation rate for USC students is 92 percent. In comparison, the graduation rate  for four-year universities is 60 percent nationwide, and the rate for private, nonprofit institutions is 66 percent.

Students leave USC with lower-than-average student debt. USC students accumulate about $22,000 in debt during their tenure at USC as compared to the national average of nearly $32,600 for private colleges.

US News ranks USC among the top 40 Best Value Schools in the country. The university is rated third in the nation for economic diversity by US News.