Fake social media accounts can be hazardous to your health 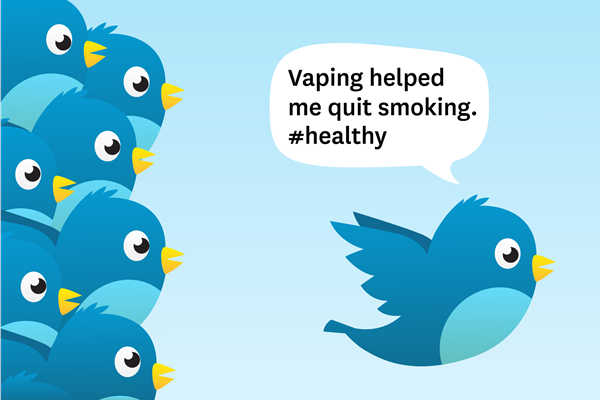 Fake social media accounts already have a reputation of swaying political discourse, but a Keck School of Medicine of USC researcher says these automated accounts are even more dangerous — they can be bad for your health.

Social bots are automated accounts that use artificial intelligence to influence discussions and promote specific ideas or products. USC researchers focused on how these bots promoted the notion that using electronic cigarettes helps people stop smoking, a conclusion not definitively supported by research.

Jon-Patrick Allem, lead author of the study, likened social bots to actress Jenny McCarthy and the “vaccinations cause autism” movement, an idea that has been debunked many times but still sticks.

“We now have measles outbreaks in Southern California because people shared personal stories about how vaccinations reportedly caused their child to have autism,” said Allem, a research scientist in the preventive medicine department of the Keck School of Medicine. “Social bots may not have the star power of Jenny McCarthy, but what they lack in fame, they make up for in quantity and determination. They are designed to promote a specific, slanted narrative — 24 hours a day, seven days a week.”

The study was published in the Journal of Medical Internet Research Public Health and Surveillance on Dec. 20. Allem and his colleagues analyzed about 2.2 million e-cigarette-related posts on Twitter from Dec. 24 to April 21.

The study is one of the first to document bots influencing unhealthy behavior, Allem said. Researchers found that social bots were two times more likely than humans to promote both new products and the idea that e-cigarettes empower people to quit smoking.

“Social bots can pass on health advice that hasn’t been scientifically proven,” Allem said. “The jury is still out on if e-cigarettes are useful smoking cessation tools, but studies have shown that the chemicals in vape juice are harmful. Scientists are still trying to understand if vaping damages the respiratory and cardiovascular system. Bottom line: Online falsehoods can influence offline behavior.”

Tobacco use is the leading cause of preventable disease, disability and death in the United States, according to the Centers for Disease Control and Prevention. E-cigarettes are the most commonly used tobacco product among children and teens.

Nearly 59 percent of adult e-cigarette users in 2015 were also traditional smokers, according to the CDC. Some 30 percent were former smokers, and 11 percent had never smoked.

To compile their data, researchers crawled Twitter to pull out tweets that used key terms such as e-cigarette, vaping and ejuice. They identified human users from social bots by analyzing retweets or mentions, ratio of followers to followees, content and level of emotion. Then they used a “BotOrNot” algorithm as the final filter.

The researchers found social bots were more likely to post hashtags where people said they quit smoking as a result of e-cigarette use (#quitsmoking, #health). The bots also promoted new products.

Humans, on the other hand, were more likely to use hashtags referencing behavior (#vape), identity (#vapelife) and vaping community (#vapenation).

“Use of these hashtags may serve further internalization of, and social bonding around, vaping-related identities,” the study stated. “These hashtags also suggest discussions of vaping may occur in an echo chamber on Twitter in which ideas and beliefs are amplified by those in the network, normalizing vaping.”

“There are many unhealthy choices social bots can promote, and our future research will focus on other areas such as tanning beds, supplements, fad diets or sugary drinks,” Allem said. “People need to be aware of these fake social media accounts, and public health campaigns should be implemented to counteract the most dangerous unhealthy behaviors these bots are encouraging.”

Emilio Ferrara and Sree Priyanka Uppu from the Information Sciences Institute at the USC Viterbi School of Engineering and Nancy Tess Boley Cruz and Jennifer Unger from the preventive medicine department of the Keck School of Medicine also contributed to this study.

The research was fully supported by the federal government through a $20,000 grant (P50CA180905) from the National Cancer Institute and the U.S. Food and Drug Administration’s Center for Tobacco Products.