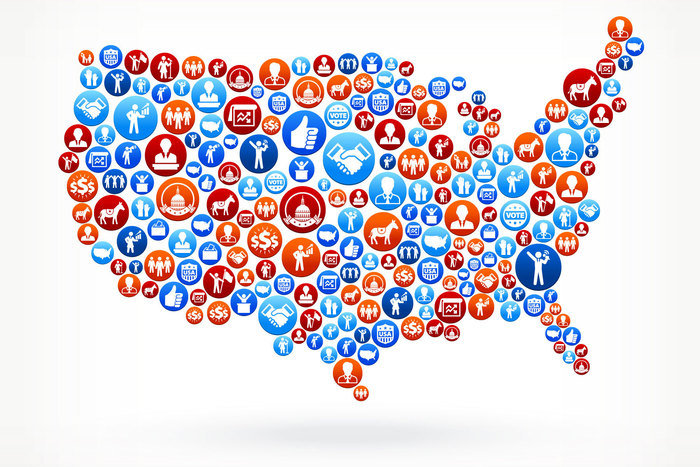 6 out of 10 women voters say they will vote for Biden and voters without a college degree are split between Biden and Trump. Trump has lost ground among these groups, and others, since 2016.

The final USC Dornsife Daybreak Poll before the November 3 general election confirms that the presidential race has remained stable — despite the chaotic backdrop of an election season coinciding with a global pandemic, racial unrest, continued economic uncertainty, corruption allegations, and a president infected with the coronavirus.

The poll, which tracks the national popular vote, shows former Vice President Joe Biden with a 10-point lead (53% to 43%) over President Donald Trump. This has narrowed slightly since the days after the first debate, when Biden had a 13-point lead over Trump. The poll is not able to provide estimates of the electoral college vote, which takes place at the state level and will determine the outcome of the election.

“For me, the big news here is no news,” said Bob Shrum, director of the USC Dornsife Center for the Political Future. “The race remains remarkably stable and if all the ballots are received and actually counted, Joe Biden is likely to win the popular vote by 9 to 11 points.” 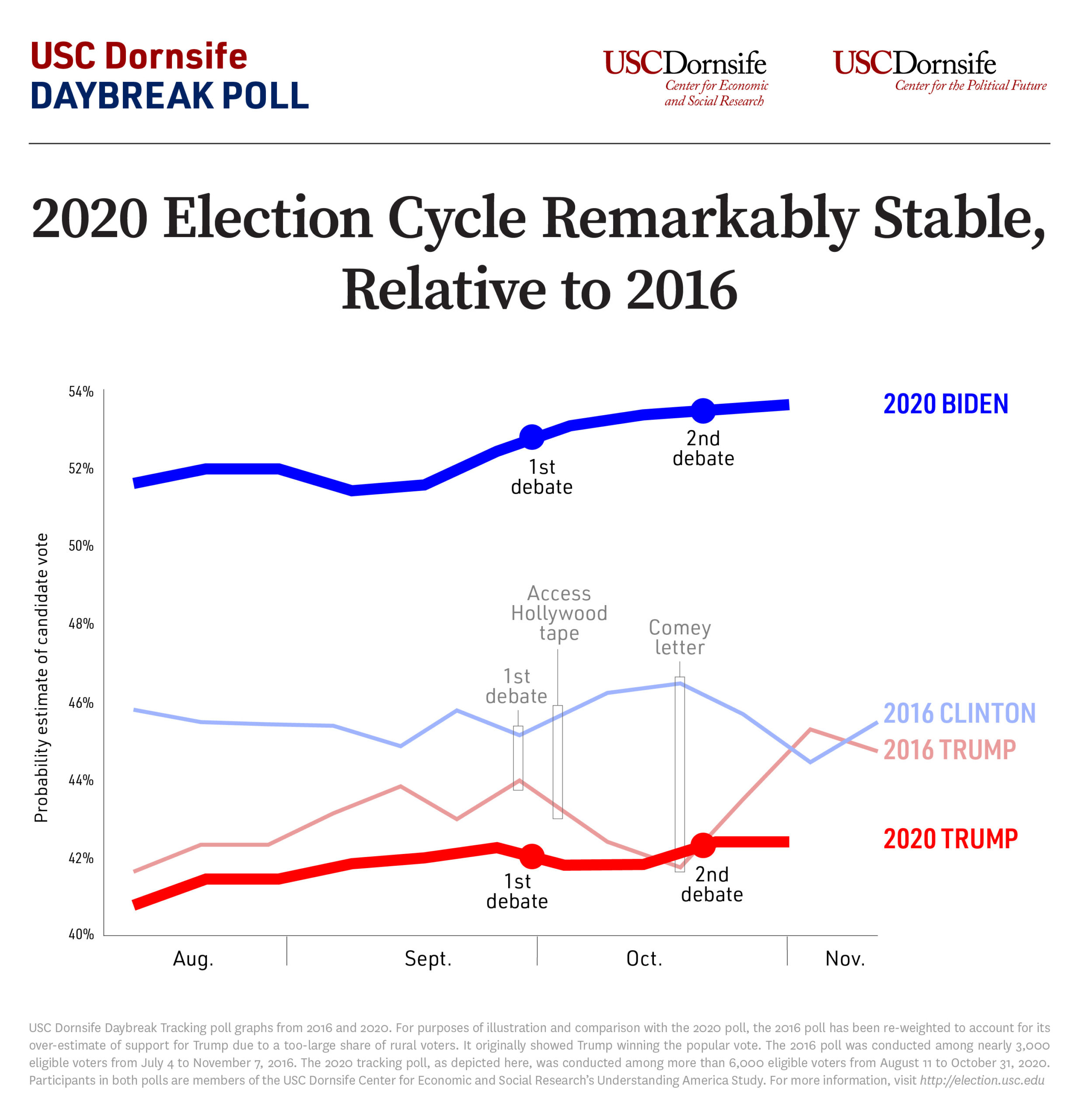 The national probability poll was conducted online from October 20 to October 31 by the USC Dornsife Center for Economic and Social Research (CESR) among 3,647 eligible voters including 3,392 who have already voted or who are likely to vote. Participants are members of CESR’s Understanding America Study panel. The poll has a margin of sampling error of +/- 2 percentage points for all voters, +/- 2 for the sample of likely voters and those who voted early, and +/- 3 for early voters, which includes everyone who reported already voting in the tracking poll since early voting began.

Overall, Biden has a distinct advantage in the poll’s measurement of the popular vote compared to Hillary Clinton’s final 2016 margin of roughly 2 percentage points over Donald Trump. Biden is benefiting from the support of some key demographic groups that were more likely to vote for Trump in 2016 than his Democratic opponent, including seniors, rural voters and those without college degrees.

The president has also lost ground among men, whites, and “other” voters (mainly Asian American and Native American). White women, who voted for Donald Trump over Hillary Clinton by nine percentage points in 2016, are currently giving Joe Biden a 2 percentage point edge, within the margin of error for that group.

“I’m particularly struck by what I would now call the hidden Biden voters — the non-college-educated women who are voting in greater numbers for Biden than we would have expected based on the 2016 results,” said Shrum. 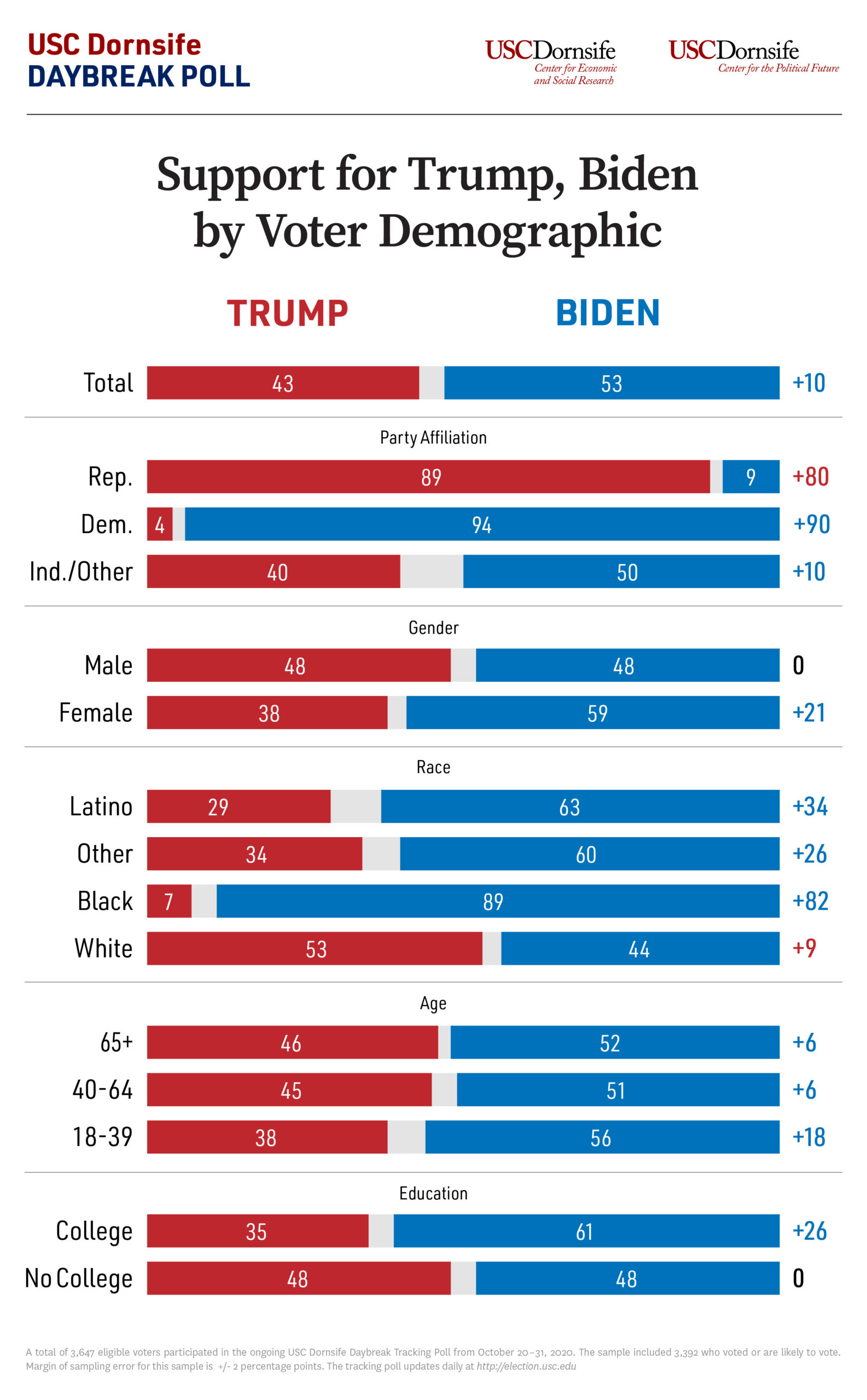 As of October 31, roughly 32% had already voted by the time they were surveyed. Just under half of those voters had mailed a ballot. Another 31% of voters who had not yet voted were planning to vote early in person or drop off a mail ballot, 16% were planning to mail a ballot, and 37% said they planned to vote in person on election day, which can include returning a mail ballot.

“If Biden’s two-to-one lead in our poll holds among early voters, Trump would need a much wider lead among those who vote in person on election day, than he holds now, to win the popular vote,” said Jill Darling, survey director of the Daybreak Poll. “The stakes are high regarding whether all mail-in votes will be counted and whether voters will show up at the polls and be able to cast their votes.”

As it stands now, according to the poll, 50% of Republican voters and those who lean Republican plan to vote on election day, compared to 34% of Democrats and Democratic leaners and 48% of independents. Looked at another way, the results indicate that just under half of the voters showing up at the polls on election day will be Republicans, more than a quarter will be Democrats and another one in five will be independents.

“We may have a red mirage on election day, depending on how the television networks handle their exit polling of absentee ballots,” said Mike Murphy, co-director of the USC Dornsife Center for the Political Future. “If the media just reports county returns in Pennsylvania, Michigan, and Wisconsin, Trump’s going to take an early lead and hold it for a while, because none of those states start counting their absentee ballots until election day.”

Voters rank the likelihood of an election challenge, and of erupting violence

Up next: Post-election questions

The day after the election, the Dornsife Daybreak Poll will be back in the field with questions about who actually voted and how that compares to pre-election estimates. Survey participants will be asked about factors that were associated with various voting choices, including voting-by-mail, early in-person voting, and voting on election day; barriers to voting among non-voters who didn’t overcome them and voters who did overcome them (e.g. vote suppression, challenges with mail-in ballots, COVID-19 fears); and their experiences with in-person voting. Additionally, pollsters will ask about QAnon, Antifa and conspiracy theories during the election cycle.

The source for comparisons between 2016 and 2020 vote is a USC Dornsife Daybreak 2016 post-election poll (UAS71), conducted from November 9 to December 19, 2016, among 4,455 eligible voters, and weighted to adjust for the overstatement of rural voters in the Dornsife 2016 tracking poll sample.