First look at USC Class of 2023: Diverse, hard-working and high-achieving

University better than ever at inviting those who say ‘yes’ More than 3,000 first-year students are on their way toward a USC degree, representing a new level of achievement, diversity and connection between the university and its first-year students. Those offered admission accepted at a higher rate than any previous cohort — indicating an exceptionally strong match of selection and aspiration.

Demand for a USC education appears to be stronger than ever. Over 66,000 applied, bringing this year’s acceptance rate to 11.4%. The number of applications to USC was among the highest of any private university.

A cohort of exceptional and curious scholars

A quarter of USC’s freshman class earned perfect grades in high school. Their average SAT and ACT test scores are in the 96th percentile.

As part of the application process, students are asked to select a few words to describe themselves. “Curious” was used most frequently. Other words repeatedly chosen included “loyal,” “empathetic,” “caring” and “tenacious.” 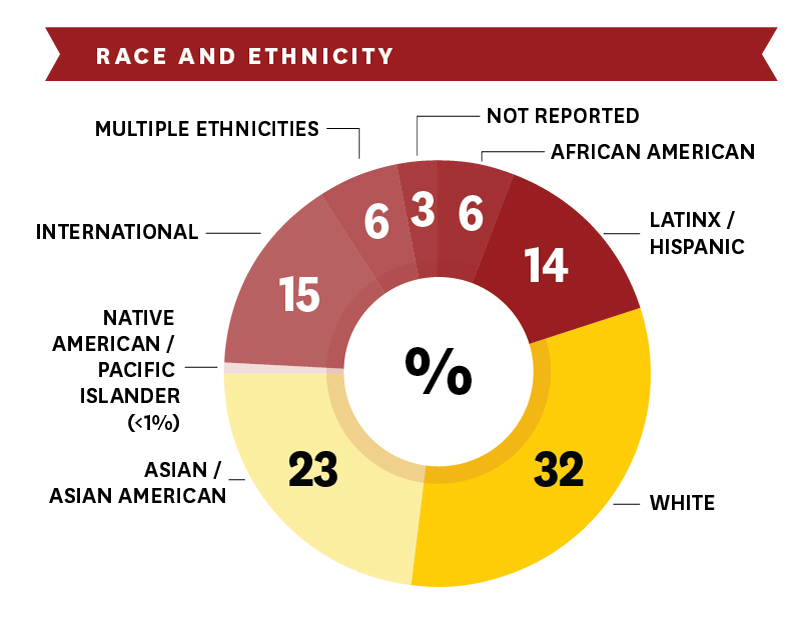 Students of all backgrounds well-represented — again

First-generation students make up 15.4% of the class.

All roads lead to Troy 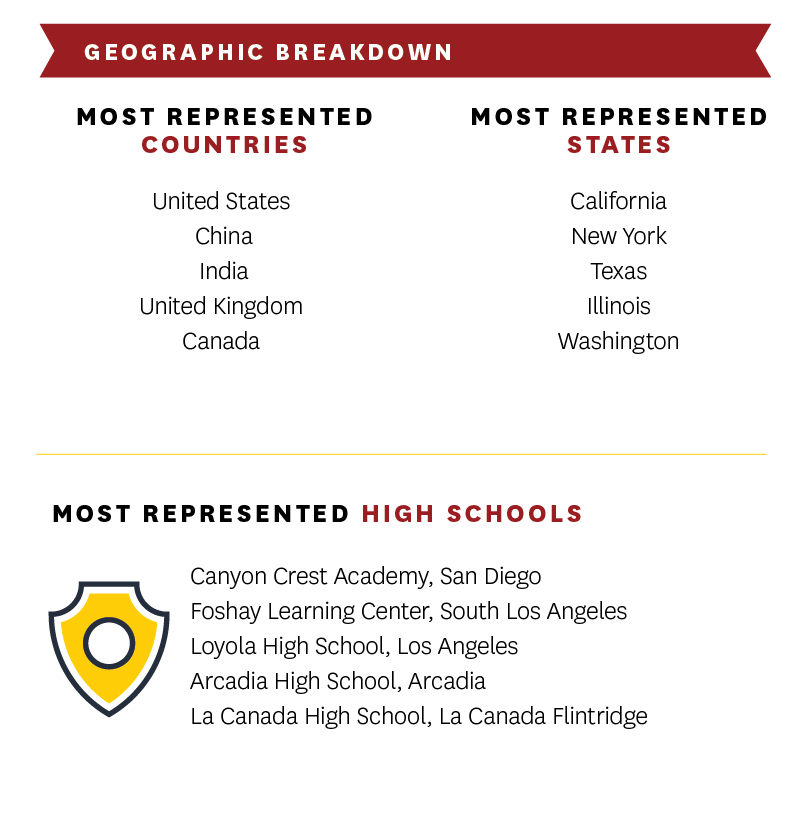 The world continues to look to USC as a destination for higher education. International students increased about 5% this year and make up about 15% of the freshman class. The highest number of international students come from China, followed by India, the United Kingdom, Canada and South Korea.

About 39% of U.S. freshmen come from California, followed by New York, Texas, Illinois, Washington and Florida.

The five high schools that send the most students to USC are all in Southern California, including Foshay Learning Center. Foshay is less than a mile from campus and has led or placed in the top five USC feeder high schools for four consecutive years. Foshay’s college preparation program, the Neighborhood Academic Initiative, is a partnership between USC and the Los Angeles Unified School District.

As fall freshmen were settling into their first semester, USC once again landed in the top 20 in the Wall Street Journal/Times Higher Education rankings. The studies that determine those rankings gave USC top marks for student engagement, resources, outcomes and environment. Within the West region, the university placed third out of 122 institutions, behind Caltech and Stanford University.

USC also ranks in the top 25 on U.S. News’ list of Best Colleges, which lists the university at No. 5 on its list of the best colleges for veterans.