Genetic Switch Regulates a Plant’s Internal Clock Based on Temperature 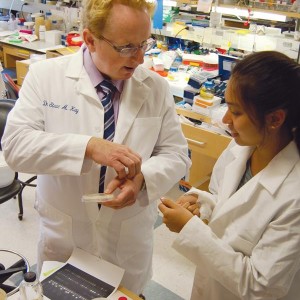 New research could one day lead to heartier plants, better adapted to deal with climate change

Scientists have discovered a key molecular cog in a plant’s biological clock – one that modulates the speed of circadian (daily) rhythms based on temperature.

Transcription factors, or genetic switches, drive gene expression in plants based on external stresses – such as light, rain, soil quality, or even animals grazing on them. A team of researchers at USC has isolated one, called FBH1, that reacts to temperature – tweaking the rhythm here and there as needed while in keeping it on a consistent track.

“Temperature helps keep the hands of the biological clock in the right place,” said Steve A. Kay, dean of the USC Dornsife College of Letters, Arts and Sciences and the corresponding author of the study. “Now we know more about how that works.”

Kay worked with lead author Dawn Nagel, a post-doctoral researcher at USC; and coauthor Jose Pruneda-Paz, an assistant professor at the University of California-San Diego, on the study, which will be published by Proceedings of the National Academy of Science during the week of Sept. 22.

Understanding the mechanics of how the interactions between the biological clock and the transcriptional network work could allow scientists to breed plants that are better able to deal with stressful environments – crucial in a world where farmers attempt to feed an increasing population amid urban development of arable land and a rising global temperature.

“Global climate change suggests that it’s going to get warmer and since plants cannot run away from the heat, they’re going to have to adapt to a changing environment. This study suggests one mechanism for us to understand how this interaction works,” Nagel said.

Both plants and animals have transcription factors, but plants have on average six times as many – likely because they lack the ability to get up and walk away from any of their stressors.

“Plants have to be exquisitely tuned to their environment,” Kay said. “They have evolved mechanisms to deal with things that we take for granted. Even light can be a stressor, if you are rooted to one location.”

Among other things, Kay’s research explores how these transcription factors affect plants’ circadian rhythms, which set the pace and schedule for how plants grow.

Kay and his team conducted their research on Arabidopsis, a flowering member of the mustard family that is used as a model organism by scientists because of its high seed production, short life cycle, and the fact that now all of its genome has been sequenced.

Image: Steve A. Kay confers with a student in his lab. (Emily Cavalcanti / USC Dornsife)