Half of U.S. adults, 3 out of 10 Angelenos don’t wear masks when in close contact with non-household members 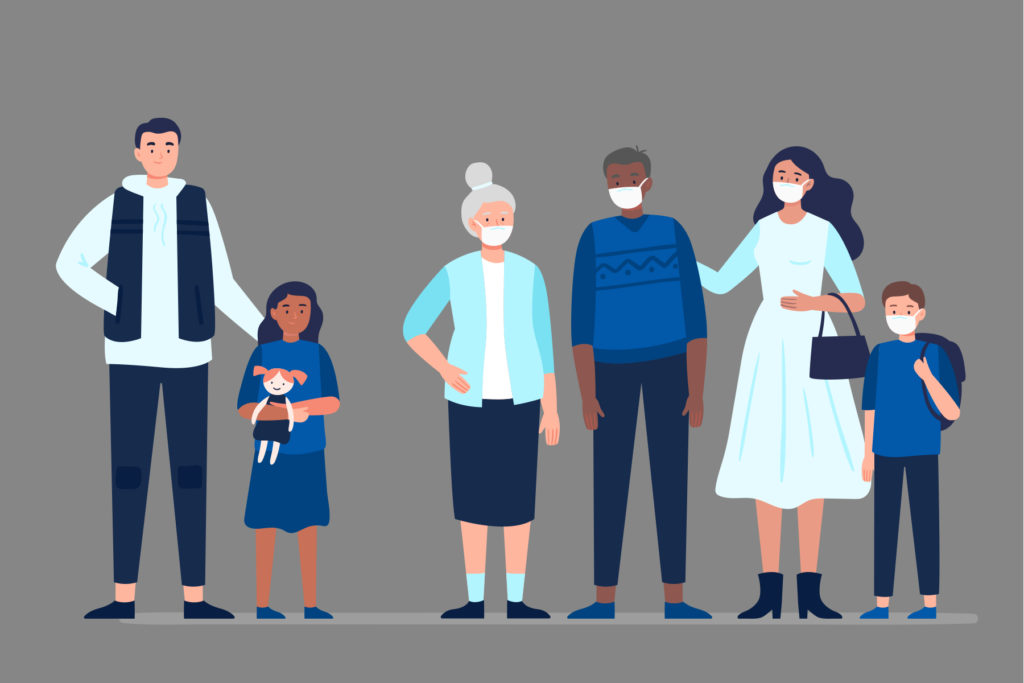 Though a large majority of Americans believe wearing a mask is an effective way to protect themselves from COVID-19, many are still non-compliant — even while engaging in higher risk activities — according to new findings from the USC Dornsife Understanding Coronavirus in America Study.

New findings from the Understanding Coronavirus in America Study, measuring the percentage of people who recently engaged in activities that may put them at risk of infection with COVID-19 and the portion of them who were wearing protective face masks. Read the full report.

The ongoing study is conducted by the USC Dornsife Center for Economic and Social Research. This analysis is from survey data collected between March 10, 2020, and Jan. 6, 2021.

Though 83% of U.S. adults view wearing a mask as an effective way to stay safe from COVID-19, their mask-wearing behavior is very inconsistent, even while they engage in higher risk activities. There are also large differences based on race and locale.

Two-thirds of Americans reported being in close contact (less than 6 feet) with people outside their household in early December, but only about half (51%) of them said they mostly or always wore a mask while doing so.

The ongoing Understanding Coronavirus in America Study is conducted by the Center for Economic and Social Research at the USC Dornsife College of Letters, Arts and Sciences. This analysis was conducted by researchers Jill Darling, Kyla Thomas, and Arie Kapteyn with valuable assistance from Natalie Theys and Alwyn Cassil.

“These findings indicate a need to redouble efforts to convey consistent messages about the overall importance of wearing masks, but more than that — where and when to wear them,” said Kapteyn, director of the USC Dornsife Center for Economic and Social Research. “Too many seem to lack a clear understanding of the risks posed by friends and family outside their immediate households.”

“Despite L.A.’s soaring infection rates, it is clear from our data that Angelenos are more willing to wear a mask than people in other parts of the country on average,” said Thomas, a sociologist with the USC Dornsife Center for Economic and Social Research. “Still, rates of mask-wearing are far from where they need to be in L.A. to slow the spread of the virus, especially among those who are young, white or socially active.” 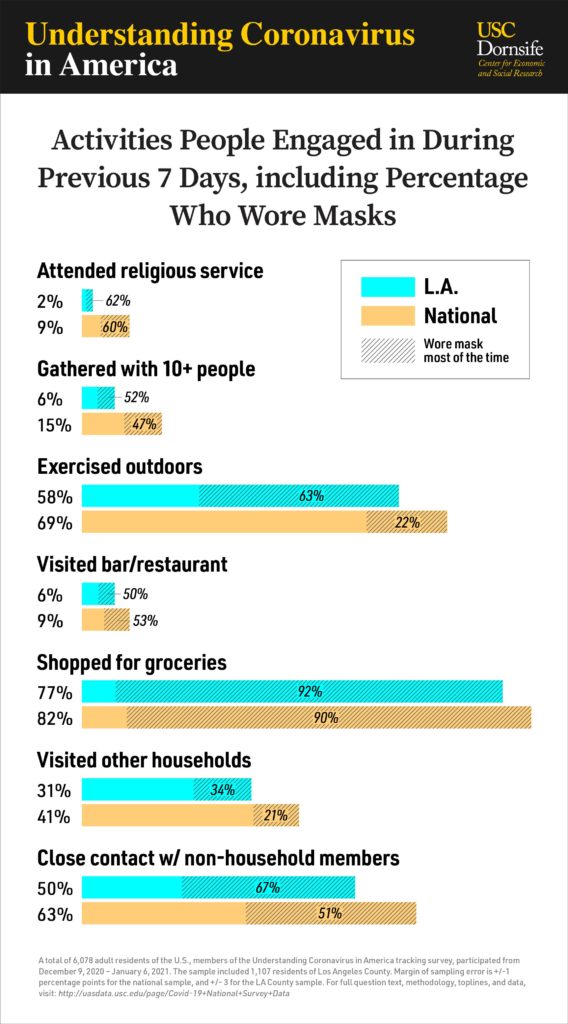 The study data was collected between March 10, 2020 and Jan. 6, 2021 from the more than 6,000 members of the Understanding America Study (UAS), a nationally representative, probability-based online panel of adults who answer tracking survey questions every two weeks.

Findings in this release are based on the 6,078 participants, including 1,107 residents of Los Angeles county, who responded between December 9, 2020 – January 6, 2021 (most responses collected by December 22). Margin of sampling error is +/-1 percentage points for the national sample, and +/- 3 for the L.A. County subsample. Margins of sampling error may be higher for some sub-groups.

Visit covid19pulse.usc.edu for more information on how the survey was conducted, for links to topline and crosstabs reports and for graphs that are updated daily.