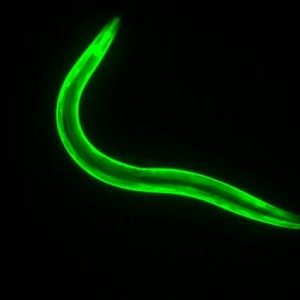 Working with worms, scientists find a link between a genetic mutation and how diets are processed

Imagine being able to take a pill that lets you eat all of the ice cream, cookies, and cakes that you wanted – without gaining any weight.

New research from USC suggests that dream may not be impossible. A team of scientists led by Sean Curran of the USC Davis School of Gerontology and the Keck School of Medicine of USC found a new way to suppress the obesity that accompanies a high-sugar diet, pinning it down to a key gene that pharmaceutical companies have already developed drugs to target.

So far, Curran’s work has been solely on the worm Caenorhabditis elegans and human cells in a petri dish – but the genetic pathway he studied is found in almost all animals from yeast to humans. Next, he plans to test his findings in mice.

Curran’s research is outlined in a study that will be published on Oct. 6 by Nature Communications.

Building on previous work with C. elegans, Curran and his colleagues found that certain genetic mutants – those with a hyperactive SKN-1 gene – could be fed incredibly high-sugar diets without gaining any weight, while regular C. elegans ballooned on the same diet.

“The high-sugar diet that the bacteria ate was the equivalent of a human eating the Western diet,” Curran said, referring to the diet favored by the Western world, characterized by high-fat and high-sugar foods, like burgers, fries and soda.

The SKN-1 gene also exists in humans, where it is called Nrf2, suggesting that the findings might translate, he said. The Nrf2 protein, a “transcription factor” that binds to a specific sequence of DNA to control the ability of cells to detox or repair damage when exposed to chemically reactive oxygen (a common threat to cells’ well being), has been well studied in mammals.

Pharmaceutical companies have already worked to develop small-molecule drugs that target Nrf2, in hopes that it will produce more anti-oxidants and slow aging.

Though the promise of a pill to help control your body’s response to food is enticing, it is not without risk, Curran said. Increased Nrf2 function has been linked to aggressive cancers.

“Perhaps it is a matter of timing and location,” Curran said. “If we can acutely activate Nrf2 in specific tissues when needed then maybe we can take advantage of its potential benefits.”

Curran, the corresponding author on the study, collaborated with Shanshan Pang and Jennifer Paek of USC Davis; and Dana Lynn and Jacqueline Lo of USC Davis and the USC Dornsife College of Letters, Arts and Sciences.

This research was funded by the National Institutes of Health (P40 OD010440 and AG032308), the Ellison Medical Foundation, and the American Federation of Aging Research.

Image: C. elegans, a one-millimeter-long worm that scientists have used as a model organism since the 1970s. (Courtesy of the Curran laboratory)