USC Polarization Index shows immigration remains the most divisive topic in the first quarter of 2022, while the war in Ukraine is the most discussed. 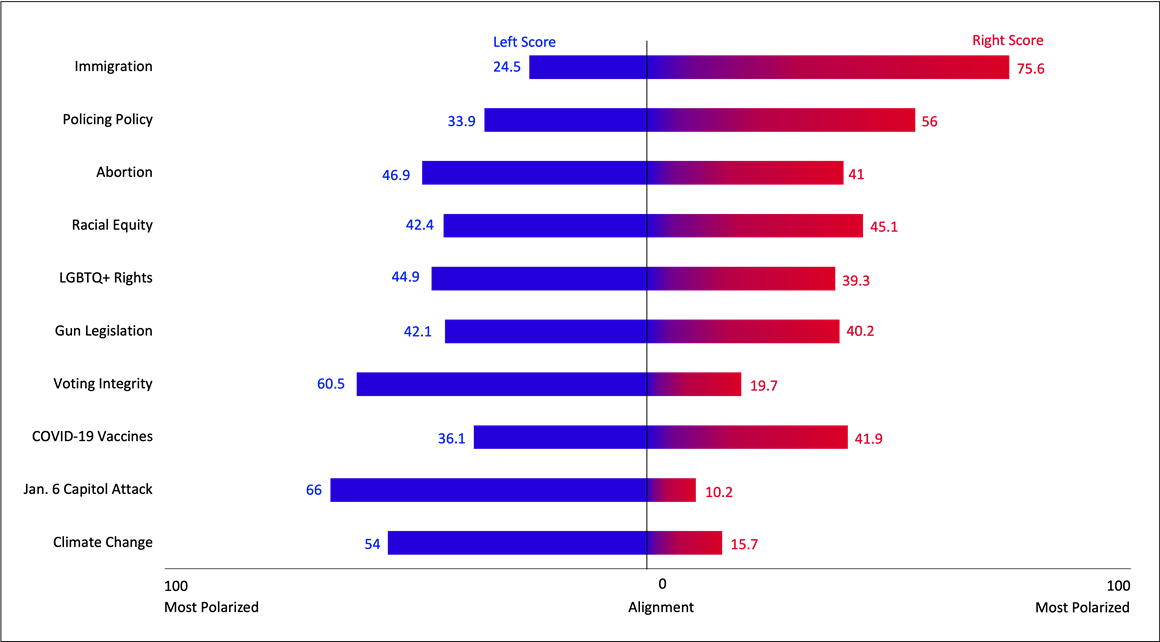 The latest USC Polarization Index (PI) reveals that since President Joe Biden was elected, overall levels of polarization in the United States remain dangerously high, spurred on by increasing controversy around reproductive rights and LGBTQ+ issues.

As measured by the volume of discourse on social media, abortion has risen from the seventh-most polarizing issue to third since the third quarter of last year. The change is primarily due to reaction from the left to the growing number of states passing legislation to restrict abortion. This is particularly noteworthy given the leak of a draft U.S. Supreme Court opinion indicating the court is leaning toward overturning Roe v. Wade.

In a recent USC Annenberg survey, 73% of public relations professionals predicted their companies will increase their corporate activism in the coming year. Previously, the subject of abortion was outside the comfort zone for all but a few corporations, such as Lyft and Uber. Both publicly opposed the recent Texas anti-abortion law.

However, as additional states adopt restrictive laws, more companies are speaking out. This week, Amazon announced that it will reimburse up to $4,000 in expenses for employees who have to travel for an elective abortion or a range of non-life-threatening medical treatments. Yelp and Citigroup have announced similar reimbursement policies. Based on the pending Supreme Court decision, this trend is likely to continue.

Similarly, the passing of the politically charged “Don’t Say Gay” law created a communication challenge for employers with a large presence in Florida, such as The Walt Disney Co., which now risks losing its valuable tax status based on their opposition.

Most companies are on the record supporting LGBTQ+ rights, but that may not be enough given the growing number of states passing new measures. Pressure from employees may force other employers to weigh in on specific legislation.

“Our latest results reinforce the premise that polarization has become a constant in our society,” said Fred Cook, director of the USC Center for Public Relations, which created the Polarization Index in conjunction with Golin, powered by data from Zignal Labs.

“One might assume that the end of the pandemic and the beginning of a war would bring the country together,” he said, “but the data demonstrates that polarization is being fueled by partisan political forces who benefit from continued conflict, which poses a challenge for American business.”

Even though the war in Ukraine has dominated cable news coverage and social media conversation, immigration remains the most divisive issue in America tracked in the Polarization Index in 2022. While the war itself is not particularly polarizing, there has been significant criticism from the right about the Biden administration’s handling of it.

The recent conversation around immigration was mainly focused on the border with Mexico, but during the period there was growing concern about Ukrainian refugees seeking asylum at the border, illustrating how issues overlap.

Despite a significant drop in the number of cases and reduction of associated restrictions, the dialogue around the COVID-19 vaccine remains highly polarized, ranking eighth on the PI, and driven by engagement from both the left and right. Many of the stories shared on social media discuss the effectiveness of the vaccines and the Biden administration’s authority to mandate it.

The contentious ongoing debate around the Jan. 6 Capitol insurgency, a violent manifestation of polarization, landed that topic on the list of controversial issues just below the vaccine. The insurgency will likely remain high on the index until the congressional investigation ends and associated media coverage subsides.

“Expectations for companies to engage on controversial issues that are important to employees and customers continue to rise,” said Scott Farrell, president of the global corporate communications practice at Golin. “In a polarized world, corporate leaders need to pay particular attention to the data to ensure their positions and comments are authentic, relevant and actionable.”

About the USC Polarization Index

Developed by the USC Annenberg School for Communication and Journalism and Golin, and powered by data from Zignal Labs, the Polarization Index is the first analytical tool to measure the level of divisiveness between the left and right. As it relates to specific issues, the Index analyzed more than 90 million interactions with relevant news stories shared on social media from a broad spectrum of media, whose bias and reliability are determined by the Ad Fontes Media Bias Chart. The overall polarization score is an average of the amount of divide that exists across the 10 most controversial issues. The Polarization Index can be downloaded at thepolarizationindex.com. Future updates will be released periodically.