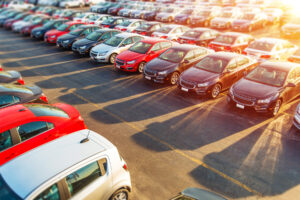 The USC Dornsife-Union Bank LABarometer survey on sustainability and resilience also reveals a 24% increase in the number of Los Angeles County residents who say their next car is likely to be electric and that 3 of 4 Angelenos believe climate change is caused by human activity.

The second annual USC Dornsife-Union Bank LABarometer survey regarding sustainability and resilience examines how Los Angeles County residents experience and interact with their natural environment in the midst of a warming climate.

Survey topics included: heat and pollution exposure, natural disaster preparedness, pro-environmental consumption, transportation behavior, and the steps residents are taking to prevent climate change from worsening as well as the measures they’re taking to live with the effects of it.

“The startling increase in the percentage of Angelenos who didn’t want to leave their homes because of unsafe air resulting from wildfires really speaks to the growing threat wildfires pose to quality of life in Los Angeles. Compared to just a year ago, our results suggest that more Angelenos are feeling the impact of climate change on their daily lives and plans.”

– Kyla Thomas, director of LABarometer at the USC Dornsife Center for Economic and Social Research.

“The fact that a large majority of Angelenos expect their next car to be an electric or hybrid vehicle doesn’t just have implications for air quality and the fight against climate change — it raises important questions about urban planning, including what happens to the city’s 500-plus gas station sites when new gas-powered cars are no longer available. The ripple effects from the switch to electric vehicles will be felt across the city for decades to come.”

– Christopher Hawthorne, director of 3rd LA at the USC Dornsife College of Letters, Arts and Sciences, Chief Design Officer for the city of Los Angeles

Less than a year ago, Hawthorne’s 3rd LA project hosted a USC Dornsife event, Pump to Plug, to consider creative responses to the challenges and opportunities posed — in urban, architectural, and environmental terms — by the transition to electric transportation. Six leading architecture, landscape, and urban design firms shared creative ways to meet the challenges and opportunities posed by growing electric vehicle use in L.A. 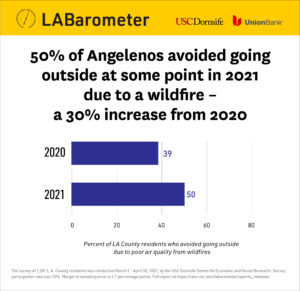 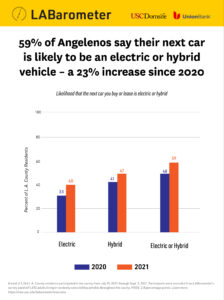 A total of 1,244 L.A. County residents participated in the second annual USC Dornsife-Union Bank LABarometer survey on sustainability and resilience in L.A. County from July 19 through Sept. 5. Participants were recruited from LABarometer’s survey panel of 1,692 adults living in randomly selected households throughout the county. The margin of sampling error is 2.8 percentage points.

For a complete description of survey data, methods, and findings, please visit https://cesr.usc.edu/labarometer/overview.

About the USC Dornsife-Union Bank LABarometer
LABarometer is a quarterly, internet-based survey of approximately 1,750 randomly selected L.A. County residents, designed and administered by the USC Dornsife Center for Economic and Social Research. The survey monitors social conditions with a focus on four key issues: livability, mobility, sustainability and resilience, and affordability and prosperity.

By following the same residents over time, LABarometer aims to capture trends and shifts in residents’ attitudes and circumstances, allowing decision-makers in the public and private sectors to better understand the evolving lives and needs of L.A. County residents. LABarometer is made possible by the financial support of Union Bank.