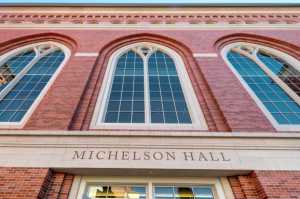 WHAT:  Michelson Hall, USC’s largest research building to date, is complete, laying a cornerstone for biotech at USC. University leaders, scientists, engineers and the Trojan Family will celebrate the milestone at a special grand opening ceremony on Nov. 1.

With 190,000 square feet of laboratory and office space, Michelson Hall is home to the new USC Michelson Center for Convergent Bioscience. Michelson Center researchers will collaborate to solve some of the greatest intractable problems of the 21st century in biomedical science, from a fundamentally new understanding of the human cell to new approaches for cancer, neurological and cardiovascular diseases.

The Center brings together a diverse network of premier scientists and engineers from the USC Dornsife College of Letters, Arts and Sciences, USC Viterbi School of Engineering and Keck School of Medicine of USC under one roof, thanks to a generous $50 million gift from orthopedic spinal surgeon, inventor and philanthropist Gary K. Michelson, and his wife, Alya Michelson.

WHO: USC President C. L. Max Nikias will address the crowd before the ribbon-cutting ceremony. Other speakers are:

THE CATALYST FOR COLLABORATION

The team of world-class scientists representing several disciplines – biological sciences, chemistry, computer science, engineering, medicine, nanomedicine, neuroscience, and physics – will be the catalyst that precipitates a sea-change in research and development at USC and the world. Together, Michelson Center researchers will establish a model for innovation in precision medicine that quickly translates from the bench to the bedside in the form of new drug therapies, cures, high-tech diagnostics and biomedical devices.

Examples of collaborative Michelson Center research already underway are a multi-year, NIH-funded project to map how memory forms by recording changes in the brains of zebrafish, a mechanical engineer’s testing of an iPhone app that could predict a heart attack long before the telltale signs of one appear.

[The video shows 5-dimensional imaging of a zebrafish embryo by the USC Translational Imaging Center, which is studying the formulation of memory. The center is run by Provost Professor Scott Fraser of the USC Michelson Center, Dornsife College and Viterbi School.]

A NUCLEUS FOR INNOVATION

Working side by side, Michelson Center researchers will speed the development of new drug therapies, high-tech diagnostics and biomedical devices.

As many as 30 scientists and engineers will be part of Michelson Center. They have a track record of innovation, such as thedevelopment of the antiviral drug Tamiflu, a promising non-invasive diagnostic test for cancer supported by former Vice President Joe Biden as part of the Cancer Moonshot initiative, and a wearable patch that enables doctors and researchers to track skin cancer patients’ exposure to harmful rays. 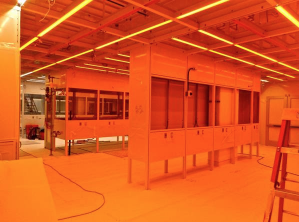 Michelson Hall has high-tech amenities for research and development. It features a cleanroom lab for dust-free nanotech testing that was specially designed to withstand vibrations from the nearby Metro Los Angeles light rail, and the fastest fiber connectivity at the University Park Campus: 100 gigabite.

Inside, Michelson Hall has several labs, such as a microscopy center that will feature custom-made, 20-foot tall electron microcopes, as well as core labs for chemical and biological research. Architects and designers also created a unique “living room” space in the building with furnishings and touchscreens intended to encourage collaboration and engagement among scientists and engineers as they are eating lunch or drinking an espresso.

Michelson Hall was built by more than 275 workers and tradesmen and was the result of more than 699,700 man hours. The leading contractors were HOK and DPR Construction.

[Image: The cleanroom is at the center of Michelson Hall and will be the hub of nanotech testing. Photo by Alton Parks]