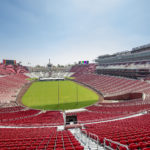 WHAT: A celebration of L.A.’s crown jewel venue, restored to its full glory and ready for its second century. With a $315 million renovation, USC and United Airlines have rejuvenated the Los Angeles Memorial Coliseum; a venue unlike any other in the world. Every seat is brand new. The seven-story Scholarship Club Tower rises majestically above the south rim of the bowl. The peristyle – crown of the Coliseum – has been lovingly restored, along with other historic elements of this living memorial to all who served in the U.S. armed forces during World War I. No public funds were used to renovate this publicly owned landmark. The project was paid for by USC, United and private donors.

WHERE: United Airlines Field at the Los Angeles Memorial Coliseum. Members of the media may enter through Gate 29.

WHO: USC President Carol Folt will address the guests and media before the ribbon-cutting ceremony. Other speakers include:

Additional materials, including high-resolution photographs of the Coliseum’s restoration, are available.