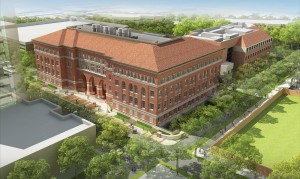 On Thursday, Oct. 23 at 11 a.m., USC’s president, a prominent philanthropist, and newly recruited scientists will inaugurate a new era in bioscience research on USC’s campus with the construction of a facility that will fast-track advances in health.

WHAT: Media outlets are offered a preview of the upcoming USC Michelson Center for Convergent Bioscience, a future hub of health innovation made possible by a $50 million gift from philanthropist Gary K. Michelson.

The building will house flexible labs, a Center for Electron Microscopy and Analysis, a nanofabrication facility and a suite of microscopy imaging technology. It will break ground at a public event featuring the USC Trojan Marching Band and confetti cannons.

The USC Michelson Center will leverage the university’s network of scientists and engineers to tackle grand challenges in health and related fields. One key goal is to turn the biological sciences into a quantitative and predictive science, fast-tracking the detection and cure of diseases.

A select group of key researchers – two of whom were recently recruited to USC – will use the state-of-the-art facility to generate the bioscience discoveries that build a better, healthier future.

•   New USC researchers who will operate the facility

Michelson’s gift represents a milestone the Campaign for the University of Southern California, a multiyear effort that seeks to raise $6 billion or more in private philanthropy to advance the university’s mission of academic excellence and to advance research and scholarship that will address society’s most pressing challenges. Three years after its launch, the campaign has raised more than $3.6 billion.