Microorganisms Duke it Out Within Algal Blooms

Looking closer, scientists discover that blooms in the ocean such as “red tides” encompass microscopic battles, with the front lines shifting on a daily basis 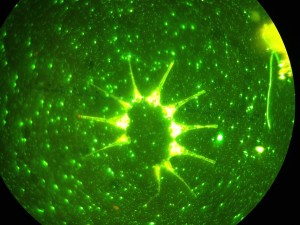 An unseen war rages between the ocean’s tiniest organisms, and it has significant implications for understanding the ocean’s role in climate change, according to a new study.

David Needham and Jed Fuhrman from the USC Dornsife College of Letters, Arts and Sciences sampled water off the coast of Southern California over the course of five months, almost every day shortly after an algal bloom occurred, and found that the cloud of microorganisms is anything but uniform. Instead, they found traces of a constant battle between dozens of species, with the fortunes of war favoring different organisms on a daily basis.

Not only do the tiny organisms, known as phytoplankton, make up the base of the food chain in the ocean, they also are the planet’s main scrubbers of carbon dioxide from the atmosphere.

“We witnessed a daily boom and bust among the phytoplankton species,” said Fuhrman, senior author of a study that was published in Nature Microbiology on Feb. 29.

Scientists concerned with global warming have a vested interest in looking closely at phytoplankton. The microscopic plants, most of which are about as big as a piece of paper is thick, perform roughly half of the world’s carbon fixation – that is, they convert carbon dioxide from the atmosphere into organic compounds that can be used by other organisms.

As creatures that exist on the boundary between sea and sky, they also have an outsized role in carbon fixation – sucking up atmospheric carbon dioxide and locking it away in the ocean.

Different phytoplankton manage carbon dioxide to varying degrees, however, making it important for researchers to gain a more nuanced understanding of algal blooms if they hope to quantify the blooms’ role in carbon fixation and carbon sequestration.

Scientists have also long wondered about the trigger of algal blooms, which can include “red tides” caused by toxic dinoflagellates that poison marine life like sea lions and can render shellfish in the area unsafe to eat. Those dinoflagellates and other toxic algae were among some of the microorganisms that dominated the bloom periodically.

Most previous efforts to study the blooms relied on microscope analysis to classify which species of phytoplankton were in the mix – a problematic strategy, given that many of the organisms tend to look alike, even to a trained eye.

Instead, Needham and Fuhrman analyzed the organisms’ ribosomal RNA, which give each species a distinctive and quantifiable signature. Specifically, they sequenced the RNA from the parts of the cell that perform photosynthesis, called chloroplasts.

“This could shift how this work is done in the future,” said Needham, lead author of the study. “I think a lot of people are going to start taking a closer look at their blooms.”

The samples were collected by dipping buckets off the side of the Miss Christi – the ship that sails daily between San Pedro and the USC Wrigley Marine Science Center (run by the USC Wrigley Institute for Environmental Studies) on Catalina Island – at a specific location at about the half way point of the trip each day.

The authors were surprised not only by the sheer diversity of phytoplankton in the bloom they studied – they counted about three dozen different species – but also by the constant and abrupt shifts in which species were dominant within the bloom.

Some of the species variability can be attributed to spatial variability However, the content of the samples changed too dramatically for that to be the sole cause, Needham and Fuhrman concluded.

In addition, as the phytoplankton varied, so did the species of bacteria and other microorganisms that feed on the organic material produced by them. On one of the sample days, the team was shocked to discover that the dominant species were in a group called the Archaea – single-celled microorganisms once thought to live only in extreme environments like hot springs.

“Until the 1990s nobody thought Archaea were even present in the sea in appreciable numbers,” Needham said.

Needham and Fuhrman’s findings also have bearing on the causes of algal blooms, which remain shrouded in mystery. Temperature and nutrient content of the ocean have been shown to help trigger the blooms – but they remain unpredictable.

This research was funded by the National Science Foundation, grants 1031743 and 1136818; and the Gordon and Betty Moore Foundation Marine Microbiology Initiative, grant GBMF3779.

The study can be found online at http://www.nature.com/articles/nmicrobiol20165.

Image: A fluorescence microscopic image showing an example of the phytoplankton and bacteria that David Needham and Jed Fuhrman observed during a five-month study of algal blooms. The large star-shape in the middle is phytoplankton; the larger green dots are bacteria or Archaea; and the tiny green dots are viruses. (Courtesy of David Needham and Jed Fuhrman/USC)