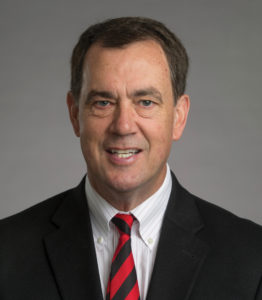 With a career that has spanned more than 35 years, Bohn is known for his integrity, leadership and student-centered focus. Starting his career at the U.S. Air Force Academy, Bohn has held key leadership roles in different conferences and successfully led athletics departments at the University of Cincinnati, University of Colorado, San Diego State University and the University of Idaho.

“In Mike, we have selected an energetic leader who will stay true to our Trojan heritage of outstanding athletic performance,” said USC President Carol L. Folt. “He has led athletics programs that are extremely competitive while demanding the highest level of integrity, and he will bring this winning combination to USC.”

Most recently at the University of Cincinnati, Bohn oversaw an athletics department that won several conference championships and enjoyed postseason appearances in multiple sports, including women’s basketball, women’s soccer, women’s volleyball, women’s track and field, men’s swimming and diving, and men’s baseball. The football team has one of the best winning percentages in college football since last year, and the men’s basketball team has won more than 28 games for three consecutive seasons.

Among many other accomplishments, Bohn prioritized academic success among the university’s student-athletes. In Spring 2019, 77% of all student-athletes at Cincinnati recorded a grade point average of 3.0 or better, achieving a departmental record GPA of 3.372.

Bohn also demonstrated a commitment to gender equity by consistently hiring female coaches at Cincinnati. His department received an “A” grade from the Tucker Center for Research on Girls & Women in Sport for seven consecutive years, the only university in the nation to do so.

“My wife Kim and I, and our entire family, are ecstatic to be joining the USC community,” said Bohn. “Throughout more than 35 years as an athletics administrator, I have always viewed USC as the preeminent intercollegiate athletics program in the country. Fueled by an imaginative and innovative vision, we will work tirelessly to position all of our student-athletes for long-term success and build a championship program with a level of integrity the entire Trojan Family will be proud of. I’m honored and humbled to be leading USC Athletics into a new era.”

Bohn will be returning to the Pac-12 Conference, where he previously served as director of athletics at the University of Colorado. While there, Bohn led the university’s transition to the Pac-12, while winning four conference championship titles in two years, including its first for men’s basketball in more than four decades.

Bohn received a bachelor’s degree from the University of Kansas – where he was recruited as a quarterback and also played baseball – and a master’s degree in sports administration from Ohio University.

“It was an unbelievable honor to be part of the search committee, and know that voices from across our students, coaches and staff were being heard,” said student-athlete Anna Cockrell. “I was most impressed with AD Bohn’s passion, integrity and real examples of how he has connected with students in the past.”

Note: The national search for a new Director of Athletics was assisted by Turnkey Search, a division of Turnkey Sports & Entertainment.