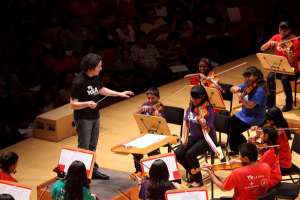 June 14, 2016 – Music instruction appears to accelerate brain development in young children, particularly in the areas of the brain that are responsible for processing sound, language development, speech perception and reading skills, according to initial results of a five-year study by USC neuroscientists.

The Brain and Creativity Institute at USC began the five-year study in 2012 in partnership with the Los Angeles Philharmonic Association and the Heart of Los Angeles to study the impact of music instruction on children’s social, emotional and cognitive development.

These initial study results, published recently in the journal Developmental Cognitive Neuroscience, provide evidence of the benefits of music education at a time when many schools around the nation have either eliminated or reduced music and arts programs. The study shows music instruction speeds up the maturation of the auditory pathway in the brain and increases its efficiency.

“We are broadly interested in the impact of music training on cognitive, socio-emotional and brain development of children,” said Assal Habibi, the study’s lead author and a senior research associate at the BCI in USC Dornsife College of Letters, Arts and Sciences. “These results reflect that children with music training, compared with the two other comparison groups, were more accurate in processing sound.”

For this longitudinal study, the neuroscientists are monitoring brain development and behavior in a group of 37 children from underprivileged neighborhoods of Los Angeles.

Thirteen of the children, at 6 or 7 years old, began to receive music instruction through the Youth Orchestra Los Angeles program at HOLA. The community music training program was inspired by the El Sistema method, one that LA Philharmonic conductor Gustavo Dudamel had been in when he was growing up in Venezuela.

The children in YOLA learn to play instruments, such as the violin, in ensembles and groups, and they practice up to seven hours a week.

The scientists are comparing the budding musicians with peers in two other groups: 11 children in a community soccer program, and 13 children who are not involved in any specific after-school programs.

Within two years of the study, the neuroscientists found the auditory systems of children in the music program were maturing faster in them than in the other children. The fine-tuning of their auditory pathway could accelerate their development of language and reading, as well as other abilities – a potential effect which the scientists are continuing to study.

The enhanced maturity reflects an increase in neuroplasticity – a physiological change in the brain in response to its environment – in this case, exposure to music and music instruction.

“The auditory system is stimulated by music,” Habibi said. “This system is also engaged in general sound processing that is fundamental to language development, reading skills and successful communication.”

The auditory system connects our ear to our brain to process sound. When we hear something, our ears receive it in the form of vibrations that it converts into a neural signal. That signal is then sent to the brainstem, up to the thalamus at the center of the brain, and outward to its final destination, the primary auditory cortex, located near the sides of the brain.

The progress of a child’s developing auditory pathway can be measured by EEG, which tracks electrical signals, specifically those referred to as “auditory evoked potentials.”

In this study, the scientists focused on an evoked potential called P1. They tracked amplitude – the number of neurons firing – as well as latency – the speed that the signal is transmitted. Both measures infer the maturity of the brain’s auditory pathways.

As children develop, both amplitude and the latency of P1 tend to decrease. This means that that they are becoming more efficient at processing sound.

At the beginning of the study and again two years later, the children completed a task measuring their abilities to distinguish tone. As the EEG was recording their electrical signals, they listened to violin tones, piano tones, and single-frequency (pure) tones played.

Children who were in the youth orchestra program were more accurate at detecting pitch changes in the melodies than the other two groups. All three groups were able to identify easily when the melodies were the same. However, children with music training had smaller P1 potential amplitude compared to the other children, indicating a faster rate of maturation.

“We observed a decrease in P1 amplitude and latency that was the largest in the music group compared to age-matched control groups after two years of training,” the scientists wrote. “In addition, focusing just on the (second) year data, the music group showed the smallest amplitude of P1 compared to both the control and sports group, in combination with the accelerated development of the N1 component.”

The study was funded by Brain and Creativity Research Funds.

Co-authors of the study were BCI neuroscientists B. Rael Cahn, and co-directors of BCI Antonio Damasio and Hanna Damasio.