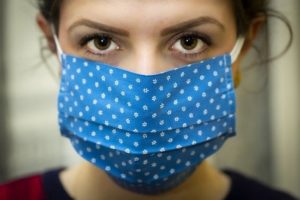 USC Dornsife’s Understanding Coronavirus in America Study tracks changes in perceptions and experiences of Americans related to coronavirus and how its impacting lives. Daily updated data is made available to researchers and the public.

New findings from one of the few probability-based national tracking surveys to measure the impact of the coronavirus pandemic on the lives of Americans reveals, among other things, that an estimated 25.5 million jobs have been lost since mid-March. Americans are experiencing greater economic insecurity, limited access to unemployment benefits and increased psychological distress. And along all dimensions, people of color have been disproportionately impacted.

The Understanding Coronavirus in America Study, led by the USC Dornsife Center for Economic and Social Research and supported by the Bill & Melinda Gates Foundation and USC, has been surveying a panel of nearly 5,500 adult residents of the United States about their perceptions and attitudes regarding coronavirus and how it’s impacting their lives since mid-March. Data from the study is updated daily and available to researchers and the public at: covid19pulse.usc.edu

The latest survey was conducted from April 1 to April 14 and compares findings from a similar survey from March 10-31, 2020.

“Because our panel members fill out questions in the tracking survey on a daily basis, we are able to pick up any changes in behavior or attitudes that may occur as a result of the pandemic,” said Jill Darling, survey director for the Understanding America Study online panel that provides the sample for the tracking survey. “Since the same people respond to each wave of the survey, we can detect real shifts in the impact the pandemic is having on people’s financial and personal lives.”

Americans are increasingly suffering from financial setbacks and mental distress due to the COVID-19 pandemic, but they’re also taking much greater care to protect themselves from infection, according to the survey.

Financial and mental health challenges fell disproportionately on people of color, women, and those with lower levels of education, with Los Angeles County residents often reporting greater difficulties than the national average.

Nationally and locally, an increasing number of respondents believe they are likely to contract the virus and die from it, which may explain why an increasing percentage are adopting social distancing and other health behavior measures. 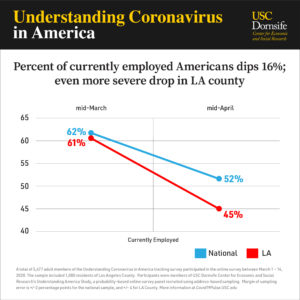 Nationally and locally, the survey showed a continuing loss of jobs – especially in L.A. County.

Despite the steep job losses, only 36% of the recently unemployed have received unemployment insurance since mid-March, and fewer than 25% living in Los Angeles have received the benefit.

“Under normal circumstances, losing a job without access to benefits would be bad enough, but in the current situation, the chances of finding a new job are likely to be close to non-existent. These changes are nothing less than catastrophic for those affected,” said Arie Kapteyn, Director of the USC Dornsife Center for Economic and Social Research, which administers the tracking survey.

Lack of access to unemployment benefits is particularly pronounced among African Americans, Asians and people with a lower level of education. Across these groups, 40-55% are potentially eligible but are not receiving the benefit because they have not filed, are unsure of how to apply, or have applications pending. 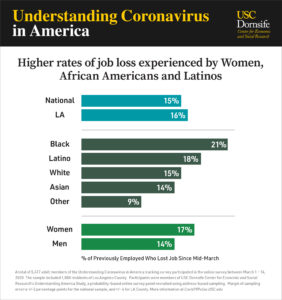 Across America, and especially in L.A. County, a growing number of people fear losing their jobs and running out of money.

Nationally, Latinos are the least confident about their job security, but, since mid-March, African Americans report the steepest increase in their likelihood of running out of money in the next three months, from a 23% likelihood to a 32% likelihood. 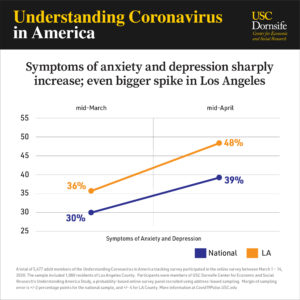 The pandemic is increasingly taking a toll on mental health and increasing fears of becoming infected.

“In the face of the pandemic, longstanding social and economic disparities and limited social protections have left large swaths of our population vulnerable to greater psychological and economic hardship,” said Kyla Thomas, Sociologist at the USC Center for Economic and Social Research and a member of the survey team.

Fear of Infection and Death

Protective Measures on the Rise 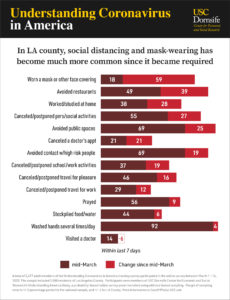 Some of the most pronounced changes over the two time periods relate to the measures Americans are taking to prevent the spread of the virus.

The probability-based internet panel survey was conducted by the Understanding America Study at USC Dornsife Center for Economic and Social Research. The margin of sampling error is +/- 2 percentage points among the sample of 5,477 adult residents of the U.S.

The survey questions, topline data, and data files are available at https://uasdata.usc.edu/page/COVID-19+Corona+Virus.

Image by Christo Anestev from Pixabay