Pandemic pushes California into new age of telehealth and telecommuting 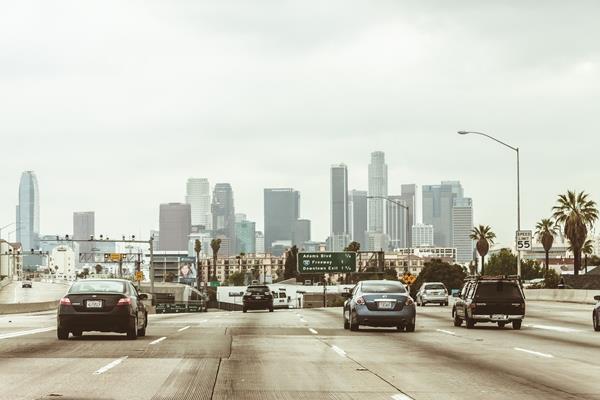 For many, habits developed during the COVID lockdown are likely to continue, leading to reduced vehicle trips to work and medical appointments — and the potential for carbon emission reductions. But changes in habits and benefits vary by race/ethnicity, age and income.

CETF leaders and USC researchers held a Zoom discussion with media about these latest results April 19. Click here to view.

Though the technology needed to work from home and consult with health professionals online has been established for decades, traditional paradigms remained in place. During the pandemic, however, Californians have embraced telecommuting, telehealth and distance learning in ways that offer opportunities to leverage broadband access to support sustainability and improve access to health, education and other essential services, according to a new statewide survey released Monday by USC and the California Emerging Technology Fund.

The survey of 1,650 residents showed 55% of workers with access to broadband have been working fully or partly at home.

The use of telehealth has jumped across the state, driven by social distancing requirements and temporary changes in cost reimbursement policy, making remote consultations a viable alternative to in-person visits. Just over half of respondents accessed telehealth by phone, smartphone or computer during the pandemic.

“The hesitancy towards remote work, learning and telehealth was swept away by necessity during the pandemic,” said Hernán Galperin, the study’s lead researcher and an associate professor at the USC Annenberg School for Communication and Journalism. “Now we’re seeing a seismic shift in the way people want to work, learn and manage health visits among those who have broadband access. Those changes give us a real opportunity to cut congestion and carbon emissions.”

“Broadband is a key green strategy,” said Sunne Wright McPeak, president and CEO of the California Emerging Technology Fund and former secretary of the California Business, Transportation and Housing Agency. “These findings call out the need for strategic broadband investments by government leaders, transportation planners and health systems to help close the digital divide, returning triple bottom-line dividends for the economy, environment and equity.”

In addition to telecommuting and telehealth, distance learning among adults also jumped. One-third of Californians, age 18 or older and including college students, said they’ve taken an online class or training during the pandemic. Two-thirds of those say they’ll continue distance learning if they have the opportunity, though the likelihood increases with age. 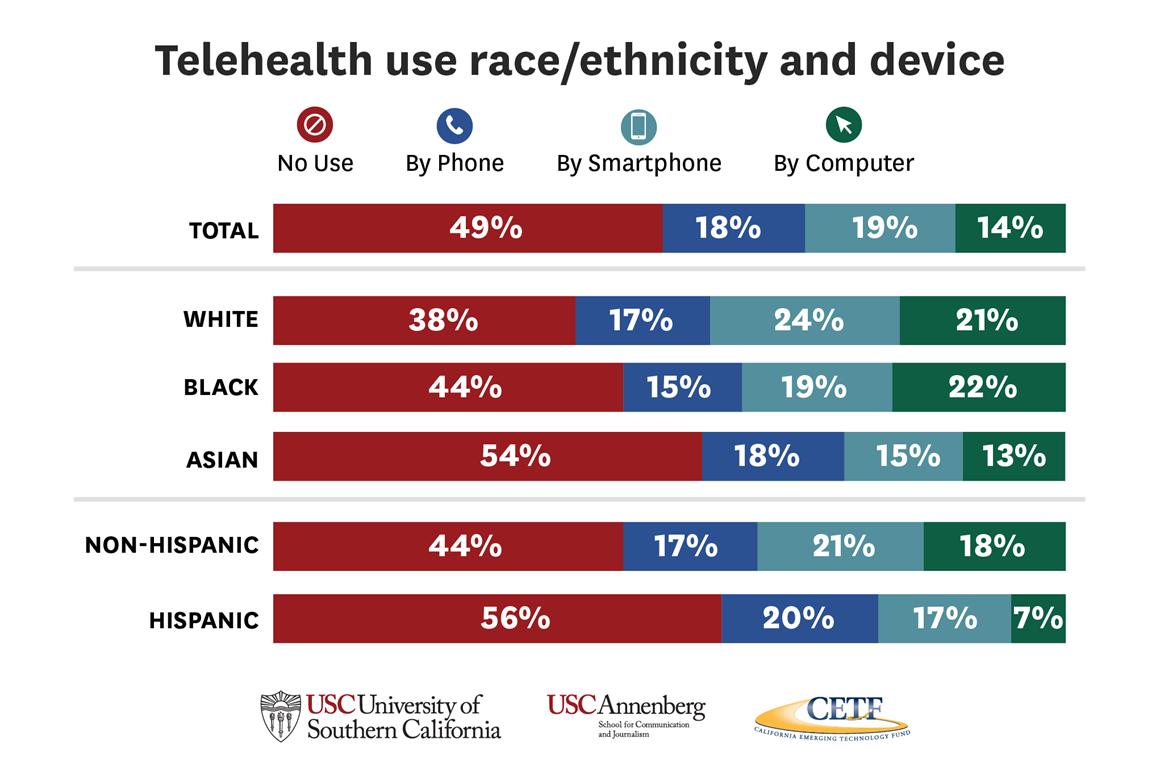 Telehealth eliminates vehicle trips, waiting rooms and reduces the time needed away from work for health and prescription consultations. Those benefits, though, are not shared equally.

Hispanics, Asian and Black respondents did not take advantage of telehealth nearly as often as white and higher-income respondents. Disparities in income, education and access to any kind of health care are likely influencers.

Among Hispanics, 56% report no use of telehealth compared to 44% of non-Hispanics, likely reflecting both their lack of access to health care and internet. The first survey released in March reported that low-income households, and particularly low-income Spanish speaking households, were more likely to have no or limited home internet access.

Disparities extend by age, with those 65 and older showing the greatest utilization of telehealth care despite that group’s lower levels of connectivity and tech savvy. Most respondents who used telehealth services use phones or smartphones.

“Telehealth access is a vital component of broadband access and equity,” said Dorian Traube, study contributor, associate professor at the USC Suzanne Dworak-Peck School of Social Work and member of the fund’s Board of Directors. “While the COVID-19 pandemic opened new access points for patients, disparities still exist in access related to essential social determinants of health, including race and place of residence. Closing the digital divide holds promise for increasing health equity.” 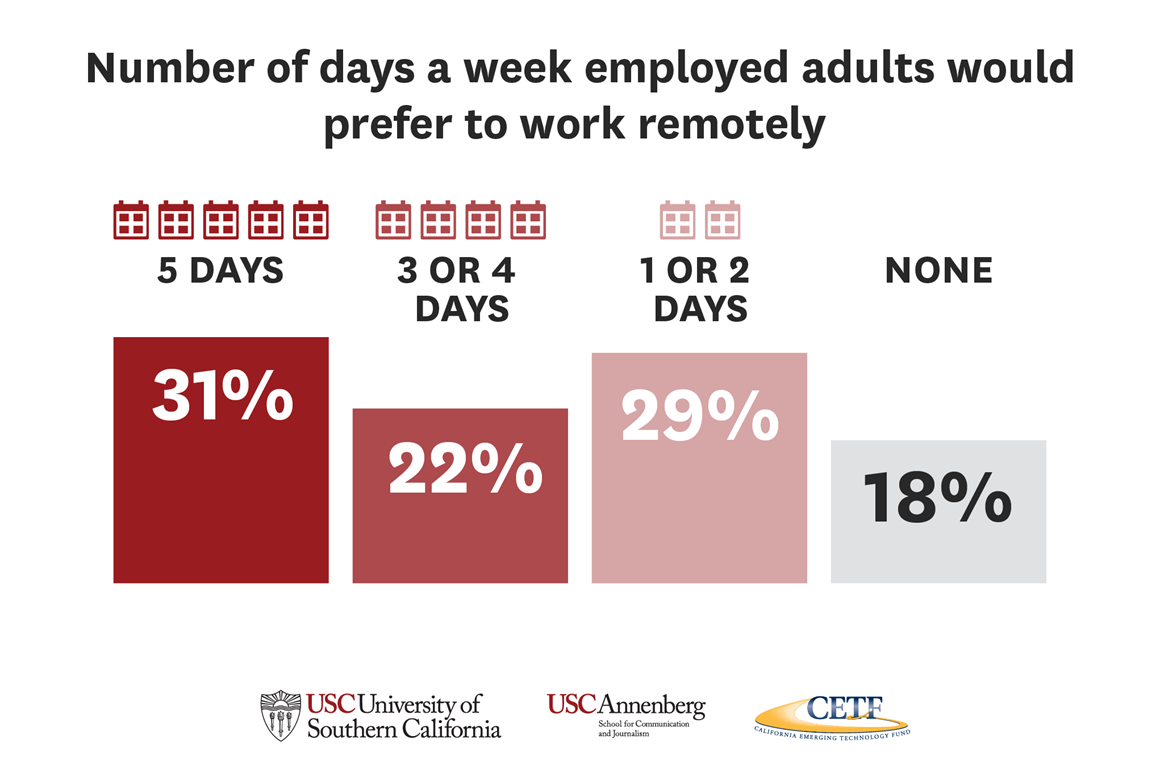 When asked how they would prefer to work, 31% of employed adults currently working from home using broadband said they’d choose to telecommute every day. Just over half would split their time while 18% would choose a traditional in-person work environment.

Survey results show telecommuting becoming commonplace, with 38% working from home full time and 17% working part time. Among adults 65 and older who are employed, 63% were able to telecommute, a necessity for many during lockdown. The 35-to-44 age group reported the second highest level of telecommuting, while the youngest demographic, between 18 and 34, was least likely to telecommute.

Telecommuting rises with income. Only 32% in the lowest income group reported working from home. The percentage climbed steadily by income group, breaking the 60% mark for those earning $60,000 to $99,999. Of those in the top income bracket, 73% reported telecommuting full or part time.

Those working from home are more likely to be college-educated women. 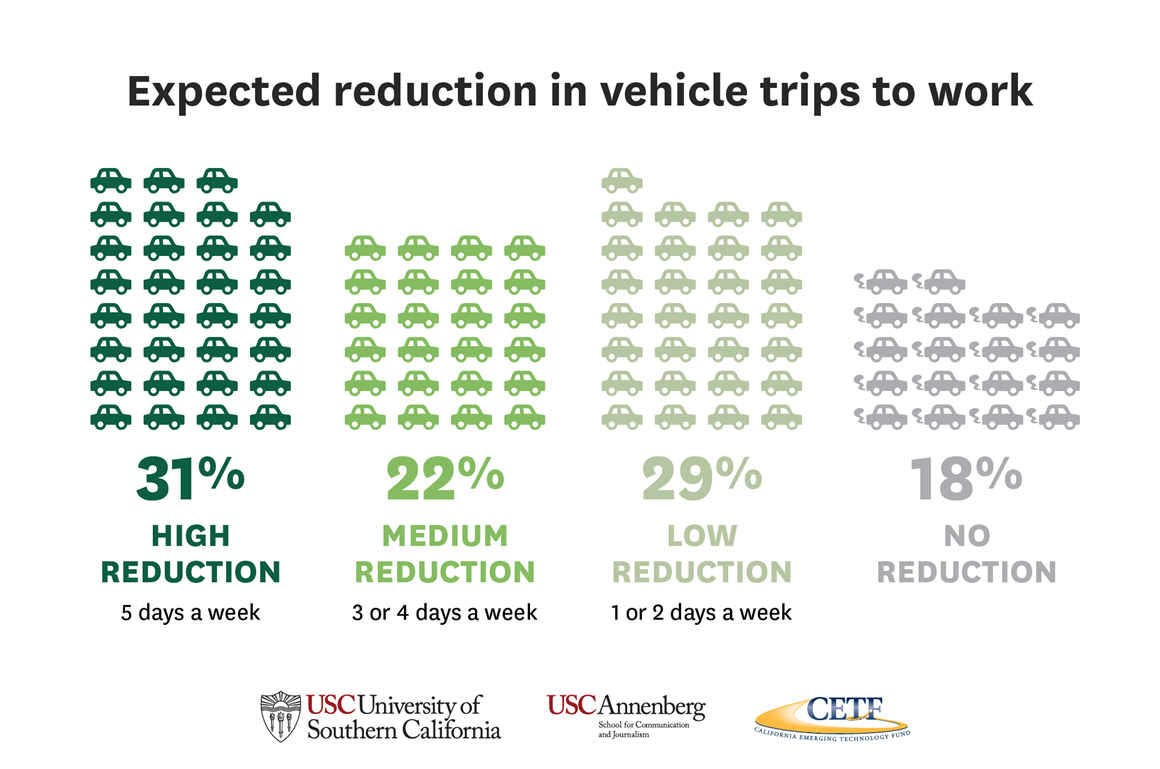 Most employed respondents expect far fewer vehicle trips, with 31% expecting telework to replace traditional commuting five days a week. Over half expect to cut vehicle trips at least once a week.

Telehealth shows great potential for trip reductions: 70% of those who’ve used telehealth during the pandemic expect they would cut their medical-related vehicle trips by at least half.

Online classes also contribute to a reduction in commutes. Overall, 95% of the respondents expect that distance learning and telehealth combined would replace at least some vehicle trips for traditional in-person courses and medical visits.

A copy of the full report can be viewed or downloaded here.

The CETF survey questionnaire was aligned to the U.S. Bureau of the Census’s definitions for race and ethnicity.

The Statewide Survey on Broadband Adoption has been conducted annually or biennially since 2008. This year’s survey of 1,650 California adults was conducted from Feb. 10 to March 22 in English, Spanish, Mandarin and Vietnamese, with 94% of interviews conducted via mobile phones and 6% via landline to reflect patterns in the population. The overall sample error is plus or minus 2 percentage points with a 95% confidence interval. The survey results are weighted for age, gender, race/ethnicity, education and region based on totals from the American Community Survey.

Click here to read the first report, which focuses on the digital divide. A recording of a news conference on the initial findings can be viewed here. The results on connectivity’s influence on education will be released by the end of April.