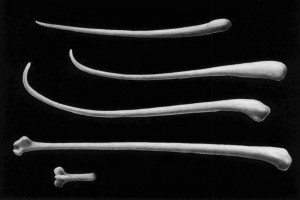 Findings shed light on bone development and the process of evolution

Different species of mice tend to look pretty much the same with one significant exception:

The shape and size of mouse bacula — ­ that is, the bone inside a mouse’s penis ­ — vary wildly. In fact, in some cases, it’s the only way to tell different species of mouse apart.

Until now, the genetic basis for that variation has remained a mystery.

“Overall shape of the animal doesn’t change nearly as rapidly as that of its genitalia. In fact, for any animal that engages in internal copulation, the evolution of male genitalia is off the charts,” said Matt Dean, an evolutionary biologist at the USC Dornsife College of Letters, Arts and Sciences.

Dean and USC graduate student Nicholas Schultz explored the genetic code of 75 distinct strains of mouse and found that just two sites on the mouse genome ­ or “quantitative trait loci (QTL)” ­ control about half of the size variation between bacula. In addition, Dean’s team found that a single QTL controls 20 percent of the variation in baculum’s shape.

Together, that suggests that only a few genetic tweaks can have an enormous impact on the overall size and shape of the baculum.

A paper announcing their finding was published on March 2 in G3: Genes/Genomes/Genetics, by the Genetics Society of America.

Though studying bacula may seem esoteric, the findings have potential implications for the study of bone development and diseases, as well as how evolution works.

“Bone physiology is important in several human diseases, such as osteoporosis. If we can pin down the genetic basis for that variation, we could better understand the roots of the disease in humans,” Dean said. “Also, identifying which genes control the bacula could eventually help us determine whether they offer an evolutionary advantage and why.”

Dean and Schultz took 3D micro-CT scans of 369 bacula. Quantitatively comparing the variations in those bacula to the variations in the genomes of the mice, they were able to pin down the genes responsible for the differences in both size and shape.

Previous studies of bacula have been complicated by the difficulty in quantitative comparison. If you have two perfectly straight bones, it’s easy to analyze their quantitative difference ­ it’s just the difference in their length and width. But with curved or oddly shaped structures, analysis becomes more complicated.

Instead, Dean and Schultz generated digital 3D models that could be manipulated in virtual space, making side-by-side comparisons possible. The technology also underpinned Dean’s earlier work that revealed the evolutionary advantage of hipbones in whales.

Dean and Schultz’s collaborators include researchers from USC, the University of Tennessee, Texas A&M, The Jackson Laboratory, and Loyola University in Chicago. Their work was funded by the National Institute of Health, grant #GM098536.

Image: Mouse bacula can vary greatly in size and shape. Pictured here are just a few examples from pocket mice. (Adapted from “Bacula of North American Mammals,” by William Henry Burt, Museum of Zoology University of Michigan, No. 113; used with permission)