Risk of death surges when extreme heat and pollution coincide 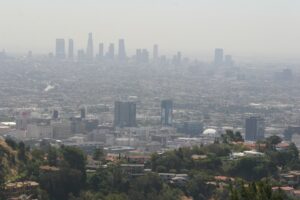 USC researchers say deadly conditions are likely to increase in frequency with climate change. Wildfires, for example, can involve extreme heat and pollution that last for days or weeks.

Contact: Leigh Hopper at lhopper@usc.edu or Laura LeBlanc at laura.leblanc@med.usc.edu

Heat waves and air pollution are harmful, even deadly, and both are predicted to increase in frequency due to climate change. A team of researchers from USC is helping shed light on the health risks by assessing six years of air quality, temperature and death certificate data in a new study, just published in the American Journal of Respiratory and Critical Care Medicine .

The study found that compared to days without extreme conditions, extreme heat days carried a 6.1% increase in risk of death. On extreme air pollution days, deaths were 5% more likely. But on days with both extreme heat and air pollution, deaths were 21% more likely—a synergistic effect almost double the impact of the individual exposures combined.

“We found that the mortality effect of exposure to both extreme temperatures and extreme pollution is greater than the sum of their individual effects,” said Md Mostafijur Rahman, a postdoctoral fellow in the Department of Population and Public Health Sciences at the Keck School of Medicine of USC and lead author of the study.

Along with overall mortality, this study also examined deaths due to cardiovascular and respiratory conditions. On extreme exposure days, people over age 75 faced the higher risk. The findings could ultimately help individuals, communities and health care systems prepare for extreme weather and minimize potential harm.

“Understanding the risks associated with these exposures is really important, because we know that they will increase with climate change in many different parts of the United States and the world,” said Erika Garcia, an assistant professor of population and public health sciences at the Keck School of Medicine and the study’s senior author. Wildfires, for example, which are expected to increase up to 50% by the end of the century, often involve extreme heat and pollution that last for days or weeks.

The risk of extreme exposure

Garcia, Rahman and their colleagues studied all deaths in California between 2014 and 2019—a total of more than 1.5 million—using death certificate data from California’s Department of Public Health. They also obtained data on air temperature and levels of fine particulate matter (PM2.5), tiny particle pollution in the air that is known to cause health problems.

Though the researchers did not study specific causes of death, these problems typically include conditions such as heart failure and pneumonia. On days when both heat and air pollution reach extreme levels, people may have more inflammation and oxidative stress, as well as problems with regulating the body’s internal temperature, Rahman said.

The findings underscore the need for protective measures and interventions as the environment continues to change, Garcia said.

For example, local governments might combine heat and air pollution alert systems to convey that the exposures are related, and notify people to exercise increased caution when the two extremes coincide. To help people stay safe, communities can provide air-conditioned cooling centers for older adults and other sensitive groups. Long-term investments could include adding more green space, as well as pavement and rooftops built from reflective materials, to help reduce temperatures in urban heat islands.

With support from USC President Carol Folt’s Presidential Working Group on Sustainability and in alignment with USC’s Assignment: Earth sustainability goals, the research team is exploring ways to translate their findings into changes that will benefit communities, both in California and beyond. Future studies will explore how extreme heat and air pollution may impact mortality related to mental health, including suicide and homicide. The research team is also studying whether disparities in mortality risk are linked to measures of neighborhood deprivation.

“If certain communities face an increased risk when these exposures occur, that will highlight an important target for interventions,” Garcia said.

In addition to Rahman and Garcia, the study’s other authors are Rob McConnell, Lawrence Palinkas, Jill Johnston and Michael Hurlburt from the Department of Population and Public Health Sciences, Keck School of Medicine of USC; Hannah Schlaerth, Joseph Ko and George Ban-Weiss from the USC Viterbi School of Engineering; Sam Silva from the Department of Earth Sciences, USC Dana and David Dornsife College of Letters, Arts and Sciences; Fred Lurmann from Sonoma Technology; and Hao Yin from the School of Population and Public Health, University of British Columbia.

This work was supported by the National Institute of Environmental Health Sciences [grant P30ES007048]; the University of Southern California Office of Research Strategic Development of Research Award; and the National Science Foundation [CBET-1752522].