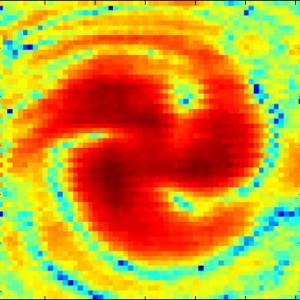 Building on previous research that twisted light to send data at unheard-of speeds, scientists at USC have developed a similar technique with radiowaves, reaching high speeds without some of the hassles that can go with optical systems.

The researchers, led by electrical engineering professor Alan Willner of the USC Viterbi School of Engineering, reached data transmission rates of 32 gigabits per second across 2.5 meters of free space in a basement lab at USC.

For reference, 32 gigabits per second is fast enough to transmit more than 10 hour-and-a-half-long HD movies in one second and is 30 times faster than LTE wireless.

“Not only is this a way to transmit multiple spatially collocated radio data streams through a single aperture, it is also one of the fastest data transmission via radio waves that has been demonstrated,” Willner said.

Faster data transmission rates have been achieved – Willner himself led a team two years ago that twisted light beams to transmit data at a blistering 2.56 terabits per second – but methods to do so rely on light to carry the data.

“The advantage of radio is that it uses wider, more robust beams. Wider beams are better able to cope with obstacles between the transmitter and the receiver, and radio is not as affected by atmospheric turbulence as optics,” Willner said.

Willner is the corresponding author of an article about the research that will be published in Nature Communications on Sept. 16. The study’s co-lead authors Yan Yan and Guodong Xie are both graduate students at USC Viterbi, and other contributors came from USC, the University of Glasgow, and Tel Aviv University.

To achieve the high transmission rates, the team took a page from Willner’s previous work and twisted radio beams together. They passed each beam – which carried its own independent stream of data – through a “spiral phase plate” that twisted each radio beam into a unique and orthogonal DNA-like helical shape. A receiver at the other end of the room then untwisted and recovered the different data streams.

“This technology could have very important applications in ultra-high-speed links for the wireless ‘backhaul’ that connects base stations of next-generation cellular systems,” said Andy Molisch of USC Viterbi. Molisch, whose research focuses on wireless systems, co-designed and co-supervised the study with Willner.

Future research will focus on attempting to extend the transmission’s range and capabilities.

The work was supported by Intel Labs University Research Office and the DARPA InPho (Information in a Photon) Program.