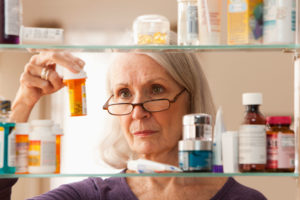 Researchers say the study is the first to investigate the association of different combinations of frequently used drugs and dementia risk in a large, representative sample of older Americans.

Certain combinations of cardiovascular drugs may also reduce risk for Alzheimer’s disease, according to a new USC study of nearly 700,000 Medicare beneficiaries.

The findings suggest that treatments already in use for blood pressure and cholesterol control could reduce the number of people with Alzheimer’s and related dementias, researchers said.

The study appears in PLOS One.

“Our research found dementia risk may be reduced with a specific combinations of drug treatments for vascular health,” said lead author Julie Zissimopoulos, director of the Aging and Cognition program at the USC Leonard D. Schaeffer Center for Health Policy & Economics. “This is the first study to investigate the association of different combinations of these frequently used drugs and dementia risk in a large and broadly representative sample of older Americans and to illuminate the differences in effect for women compared to men, and for whites, Hispanics and African Americans.”

Dementia affects about 7 million Americans and is projected to grow to 12 million over the next two decades. With no proven treatments, there has been increased global attention on prevention and risk reduction of dementia, including maintenance of a healthy lifestyle and management of risk factors such as high blood pressure and high cholesterol. Approximately one in four adults over age 65 use both antihypertensives and statins for these conditions.

“We know that managing hyperlipidemia and hypertension is important, and this study tells us there might be certain combinations of drugs that have additional benefits for Alzheimer’s and other dementias beyond the management of those targeted conditions,” said co-author Douglas Barthold, research assistant professor with the Comparative Health Outcomes, Policy, and Economics (CHOICE) Institute at the Department of Pharmacy at the University of Washington, Seattle.

Specific combinations of drugs may hold the key

The study examined the medical and pharmacy claims of a random 20% sample of Medicare beneficiaries, aged 67 and higher, enrolled in traditional Medicare from 2007 to 2014. Researchers linked claims from Medicare Parts A (inpatient care), B (outpatient care) and D (prescription drugs) to enrollment files that included beneficiaries’ characteristics such as race and sex.

To be included in the analysis, individuals had to have used both an antihypertensive and a statin for the two previous years and have no prior dementia diagnoses and no prior use of Alzheimer’s disease specific medications.

The study found the use of cholesterol lowering drugs pravastatin and rosuvastatin, combined with ACE inhibitors or angiotensin II receptor blockers (ARBs) for high blood pressure, was associated with reduced risk for dementia as compared to other combinations of drugs.

The risk was especially lower for people using pravastatin and rosuvastatin in combination with ARBs, and more so for men than women.

The magnitudes of estimated risk reductions were meaningful; for example, using ARBs combined with pravastatin was associated with 21% lower odds of a dementia diagnosis, as compared to individuals using other combinations of drugs.

“We don’t currently have drugs that are proven to treat dementia, but even small delays in onset can dramatically reduce the burden on patients, caregivers, and the health system as a whole,” Zissimopoulos said.

The study authors say more research is needed but that if their findings are replicated, specific combinations of statins and antihypertensives might be recommended in the interest of reducing the risk of Alzheimer’s disease and related dementias.

The research was supported by National Institutes of Health (NIH) awards R01AG055401, P30AG043073, K01AG042498, P01AG026572, R01HL126804, and R01HL130462, and the University of Southern California Zumberge Research Fund, 1R34AG049652. Douglas Barthold was supported through the Schaeffer-Amgen Fellowship Program funded by Amgen. Patrick Kehoe was supported by a fellowship from the Sigmund Gestetner Foundation, and NIHR-EME, Alzheimer’s Society, Alzheimer’s Research UK, BRACE, the Medical Research Council, and the British Heart Foundation. The sponsors had no role in the design, methods, analysis, interpretation, or preparation of the paper.