Teen Turnoff and the Cycle of Family Aggression

Teens whose parents are very aggressive mute their emotional brains in response and are at risk of perpetuating a cycle of family violence, a USC study finds. 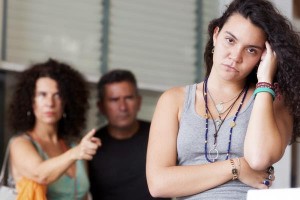 Parents’ yelling is a turnoff for teens, but don’t mistake their emotional shutdown as a sign of ennui.

In a recent study, University of Southern California researchers explored how the stress of frequent exposure to family conflict and aggressive behavior – from yelling to hitting – takes its toll on the teenage brain, and investigated whether aggression breeds aggression.

The researchers had thought that they would see the teens’ brains abuzz with activity in the wake of family conflict. Surprisingly, brain scans revealed the opposite: The teens who had experienced aggression at home exhibited muted responses in the emotional-processing areas of their brains as they watched videos of their families.

“When kids grow up in aggressive families, they may show differences in the way their brains process emotion,” said Darby Saxbe, an assistant professor of psychology in the USC Dornsife College of Letters, Arts and Sciences who led the study. “Specifically, they show less activation when viewing and processing the emotions of their parents who have behaved more aggressively. And then they go on to act more aggressively toward those same parents.”

The researchers also noticed a striking pattern: The teens who exhibited the lowest emotional response were children of the most aggressive parents. And those teens reported behaving more aggressively towards their parents two years later.

Even if no physical harm has occurred, the stress of aggressive upbringing leaves its mark. Bearing these emotional scars, some teens from very aggressive homes may eventually lash out at their parents. For those teens, input may equal output.

“These findings help us identify a signature in the brain of the transmission of aggression from one generation to another,” Saxbe said. “They also point to the role of emotion processing and empathy in aggressive behavior.”

Conducted in two parts, the study followed 21 teens from homes where one or both parents were aggressive to varying degrees, and either directed the aggression at each other, or at their children.

For the first part of the study, researchers recorded videos of the teens, then 15 years old, in a discussion with their families about conflicts.  The scientists also produced separate videos of peers whom the teens didn’t know engaged in a different discussion.

Two years later, the researchers showed the teens short clips of their family discussions. They asked the teens to “try to put yourself in that person’s shoes and imagine how they are feeling” as they watched. Then, the researchers recorded Magnetic Resonance Images (MRI) of the teens completing four-minute runs of both the family and peer videos as they rated the emotions of the parents, themselves, and their peers on a scale of 1 to 4, from negative to postive.

At a follow-up lab visit soon after the scans were completed, teens were asked to rate how aggressively they behaved toward their parents during family conflict. Researchers realized that the teens’ muted brain response to their parents is closely related to their parents’ past aggression and the aggression that they later directed at their parents.

Researchers have a couple of other interpretations about the teens’ muted responses.

“It might mean that they are tuning out and have a lack of motivation to understand or connect with parents’ emotions,” Saxbe said. “It also seems like they might be adapting to prolonged family or parent aggression by deactivating the emotional brain in response to those same aggressive parents.”

If that is the case, then this study supports the “attenuation hypothesis”: Children in stressful family environments, for the sake of self-preservation, turn to avoidance and disengagement as a coping mechanism.

Although aggression can breed aggression, Saxbe urged caution against making any generalizations. Not all children growing up in stressful households become aggressive adults, she said.

However, USC researchers plan to investigate the issue of aggression passing from generation to generation by studying the teens when they are older and in dating relationships.