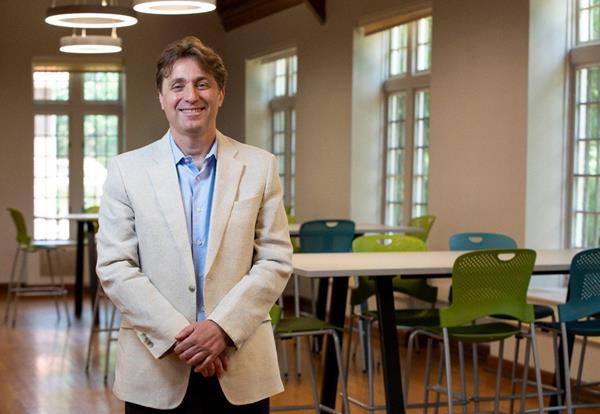 Thanassis Rikakis, an educator and researcher who has devoted his career to removing barriers between academic disciplines, has been selected as the new dean of the USC Jimmy Iovine and Andre Young Academy.

Rikakis comes to USC from the Virginia Polytechnic Institute and State University, where he is a professor of bioengineering and performing arts. Rikakis, who has served as executive vice president and provost at Virginia Tech, is the university’s founding director of innovative transdisciplinary honors programs as well as programs for adaptive lifelong learning. He also has been a co-leader of the Interactive Rehabilitation Lab, which develops interactive computing programs and semi-automated assessment methodologies to help individual patients rehabilitate at a clinic or at home.

As a musician and engineer, Rikakis has enhanced convergent research and educational opportunities so that both students and faculty can build intellectual muscle that positions them for discovery and innovation. He led convergent research and educational initiatives first as the founder of Arizona State University’s School of Arts, Media and Engineering and later as a vice provost for design, arts and technology at Carnegie Mellon University.

“Throughout his career, Thanassis Rikakis has been passionate about connecting creativity and technology – and seeing the overlap among diverse disciplines, from the arts to engineering,” USC President Carol L. Folt said. “As a musician, engineer and educator, he erased lines separating academic disciplines through his spirit of reimagination. That spirit aligns directly with the academy’s mission at the intersection of art, entrepreneurship, tech and communication.”

A researcher in systems design, engineering and the arts, Rikakis has authored publications covering computing, health, education and design.

“Technology, design and business creation are being integrated in new ways at the Iovine and Young Academy,” said Provost Charles F. Zukoski. “Dr. Rikakis has a vision for how these areas can be fused to create distinct educational pathways critical to the success of the academy and the future of higher education.”

Founded in 2013 with a gift from Jimmy Iovine and Andre Young, the USC Iovine and Young Academy for Arts, Technology and the Business of Innovation became the university’s newest professional school in 2018. Its undergraduate courses focus on art and design, business, technology and communications.

“I’m really excited to be coming to such a well-structured, forward-looking initiative,” Rikakis said. “Creating a space for people who learn differently is going to be a major goal for education in the 21st century, whether at the college level or the high school level. Those people can be catalysts for how we expand the knowledge vocabulary.”

The newly named dean credits academy founders Jimmy Iovine and Andre Young, as well as his predecessor Erica Muhl and USC, for creating a forward-thinking space like none other in higher education. Muhl — who served as the inaugural dean and founding executive director — shaped the academy’s curriculum, which combines interdisciplinary collaboration with hands-on learning. University leaders also announced that Willow Bay, dean of the USC Annenberg School for Communication and Journalism, will serve as interim dean of the academy. Bay has led the USC Annenberg School as dean since 2017.

“It’s amazing to be at a university that created a community for polymaths so we don’t have to be immigrants across silos,” Rikakis said. “It’s remarkable that as early as 2013, USC and the founders said: There’s a different way of approaching knowledge, we can do this. Thanks to that kind of progressive openness, we’re uncovering areas of human intelligence that have been a bit neglected, which will allow us as a society to do better with collaboration, connecting different types of knowledge and different types of people.”

“Many of us who were in music in the ’80s and ’90s, as personal computing and digital media started growing, were uniquely positioned to humanize computer knowledge and to then connect that to education,” said Rikakis, who served as associate director of Columbia’s Computer Music Center in the late 1990s. “Anybody who learns music learns logical structures, mathematical structures and communication structures that can apply to any field if you can figure out how to transfer that knowledge.”

In 2015, he joined Virginia Tech to focus on transdisciplinary learning and research, as well as expansion plans for the Virginia Tech Carilion Health Sciences and Technology campus. He went on to found the Calhoun Honors Discovery program, created through a major gift from the CEO of Boeing. The program is a cross-disciplinary collaboration initiative that merges industry and academic expertise and offers full tuition scholarships to those accepted. As director of the Calhoun Center for Higher Educational Innovation, he developed methodologies and tools to foster inclusive and adaptive lifelong learning.

“Academia has achieved significant progress in knowledge through the focused approach of the disciplines. But the integration of different disciplines, different approaches, is where we’re going to see many future breakthroughs in human intelligence,” Rikakis said. “Complex problem-solving across many interacting dimensions is something that computers cannot do well because these processes are not analytical or deterministic. They’re really highly probabilistic decision spaces that require the human ability to synthesize difference.”

Rikakis was drawn to USC in part because of its place at the center of one of the world’s most culturally vibrant cities. He plays piano, trumpet and recorders and has penned 30 compositions. Music is the connective tissue that binds the academic character of a man whose expertise reaches across many disciplines. He credits composer Olivier Messiaen, with whom Rikakis attended composition seminars decades ago, with a philosophy of collective brilliance.

“One of the students at a seminar asked, ‘How do we become original creators?’ and Messiaen said, ‘There is no such thing as original creators. We are all gifted transmitters and receivers,’” Rikakis said. “It changed my life because you step back from this idea of individual genius. It is community that sensitizes us to what’s needed next, and we’re expressing that — moving forward and creating a more equitable, inclusive and sustainable society.”