The first USC basketball “green game” tips off this weekend 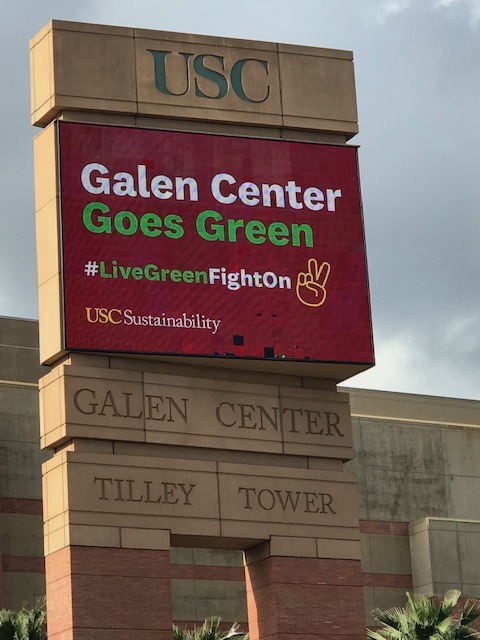 The Galen Center will host its first green game basketball match on Saturday night, a big step toward achieving zero-waste sports events at USC. The arena is also site of a rooftop solar energy project and thousands of energy-conserving light bulbs – part of a growing sustainability campaign at USC.

The USC Galen Center will host its first “green game” on Saturday – a big step toward achieving zero-waste sports events and part of a wider effort to make the 300,000-square-foot arena sustainable.

The game starts at 5 p.m., Feb. 29, when the Trojan men’s basketball team plays the Arizona State Sun Devils. USC will also be competing with other PAC-12 schools to see which ones can divert the most waste at a single sports event. The game is key to efforts to begin reducing waste at the arena.

The basketball game marks an expansion of similar zero-waste efforts at other sporting events, including USC football games at United Airlines Field at the L.A. Memorial Coliseum. This past football season USC ranked tops in per capita recycling among PAC-12 universities in Recyclemania’s Gameday Recycling Challenge.

“It’s become a source of pride to score high in this competition,” said Jose Eskenazi, associate athletic director for USC. “It’s important for us as leaders at USC to set an example in the community to practice sustainability.”

At the Saturday basketball game, fans, concessionaires and teams will contribute to the goal to achieve a 90% waste diversion rate. Specialty receptacles will be added to sort waste and docents will help fans manage waste. Environmental messages will beam on the scoreboard to ensure waste ends up in composting bins rather than disposed in landfills.

Additional efforts to help the Galen Center go green include a clean energy makeover. On Feb. 22, work crews hoisted solar panels atop the Galen Center in the first installment of a renewable energy retrofit at the facility at the corner of West Jefferson Boulevard and South Figueroa Street. It is the biggest solar energy project at the university to date, and it signals a commitment to become a carbon-free campus under the leadership of USC President Carol L. Folt.

Galen Center emerges as a catalyst for USC sustainability

“The Galen Center marks the spot for the start of a new era of sustainability at USC,” said Ellen Dux, director of the USC Office of Sustainability. “New energy efficiency measures and renewable energy at the arena helps lower our carbon footprint, fight climate change and partner with the City of Los Angeles to improve lives in the community.”

A second hoist of solar panels at the arena is scheduled for March 21. Once the solar panels are fully installed by mid-June, up to 15% of Galen Center’s energy will come from solar—more than any other big USC facility.

Sustainability is a top priority for USC President Folt, an environmental scientist and the 12th president for the university. Since her Sept. 20 inauguration – another zero-waste event – she has pledged new environmental initiatives, including:

Those goals and more are supported by a new sustainability master plan under development to guide USC’s environmental programs though 2028. That plan is scheduled for completion by the end of the calendar year.