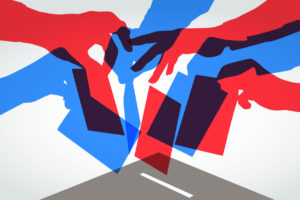 “Advocates for reform argue that top-two primary creates incentives for legislators to be less extreme than those elected in closed primary systems, as they must appeal to same-party, different-party, and independent voters,” said Christian Grose, USC Schwarzenegger Institute academic director and the study author. “This study is the first to demonstrate this outcome by analyzing voting behavior of members of Congress.”

For the study, Grose compared election results of U.S. House members in those three top-two primary states to representatives elected in all other states. Grose also examined how state legislative races in those three states were affected.

Grose presented the research during an online event co-hosted by the institute and Open Primaries. The study will be published in the June 2020 issue of the Journal of Political Institutions and Political Economy.

Grose used a multidimensional scaling application called DW-NOMINATE, developed by political scientists Keith T. Poole, Howard Rosenthal, and James Lo to assign each U.S. House member a score ranging from -1 (most liberal) to +1 (most conservative). The scores were based on roll-call votes from 2003 to 2018 by each member of Congress and were used to determine where lawmakers fell along the ideological spectrum.

Grose also found legislators elected in open primaries show some evidence of reduced extremity. He found this ideological moderation among both incumbents and newly elected legislators, although newer members of Congress who were first elected under the reformed elections systems were even less extreme.

“The magnitude of the effect sizes between top-two and open primaries were particularly interesting,” said Grose. “Top-two primaries reduce legislator extremity by almost double the amount of the reduction of open primaries.”

The cure for political polarization?

Political scientists say partisan polarization in Congress is at its highest levels in more than 100 years. Political reformers believe changes to electoral institutions are an important way to break through these growing divisions, which contribute to increased legislative gridlock, inability to negotiate and fundamental breakdowns in the policy-making process.

As of 2020, the top-two primary elects just under one-fifth of the country’s U.S. House members each year. The system allows all voters, regardless of party affiliation, to vote in the first-round primary and the second-round general election. The second-round general election features the two candidates who received the most votes in the first round, even if both candidates are from the same party.

While the top-two primary requires voters to consider all candidates, open primaries allow voters to choose which party primary they would like to vote. Both systems contrast with closed primaries, which limit first-round participation to registered party voters and always lead to different-party general election matchups.

Supporters of the top-two primary say this system may be the antidote to the increasing ideological polarization in Washington, D.C. and many state legislatures. Advocates interested in increasing options and access for independent voters have worked to expand the top-two and other open primaries to several states.

Meanwhile, both major political parties have fought these reforms, actively working to oppose ballot initiatives supporting top-two primaries and challenging them in the courts. Notably, the Florida Supreme Court recently voted to allow a constitutional amendment, known as “All Voters Vote” on the November ballot; if it passes, it will open that state’s closed primary system to its more than 13 million voters, regardless of party registration, and create a top-two primary in Florida.

“This study demonstrates the type of primary and electoral systems we choose can reduce extremism and ultimately political polarization,” said Grose. “Those interested in reducing legislator extremity in the U.S. House should consider adopting new primary systems that encourage legislator moderation.”