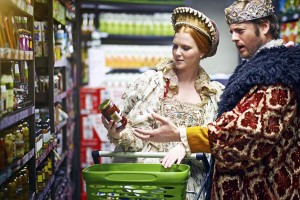 Halloween-themed plates at a Labor Day party. A bride in a green gown with her groom in a purple tuxedo and no wedding party. An obituary that declares of the deceased: “Regina had no hobbies, made no contribution to society, and rarely shared a kind word or deed in her life.”

These cultural faux pas would surely set America’s late etiquette expert, Emily Post, spinning in her grave. But for a team of researchers at USC and other institutions, these situations – which included July Fourth and Labor Day parties hosted by the lead researcher’s mother – were opportunities for natural experiments.

People are more likely to think and behave mindlessly – buying things, eating more and performing poorly on cognitive reasoning tests when they encounter a cultural situation that meets their expectations, such as a white wedding. The researchers referred to these situations as moments of “cultural fluency.”

The opposite is true for people confronted with moments of “cultural disfluency” – such as the wrong holiday plates at a party or a “goodbye-and-good-riddance” obituary. Then people perform better on cognitive reasoning tests and are less likely to succumb to impulse purchases and consumption.

“Culture sets up a general blueprint for the way things should work, so that if things unfold as we expect, we don’t have to think,” said corresponding author Daphna Oyserman, Dean’s Professor of Psychology and Co-director of the USC Dornsife Center for Mind and Society. “It’s good because it frees up our cognitive capacity to do other things. But it also has a downside because it means we’re not processing details. What we showed in these studies is that this lack of attention carries over to unrelated tasks.”

Oyserman said the study’s results show that people shift from a low-level, associative thought process to higher level, systematic thinking when they encounter a situation in which something is awry. This shift in intensity is the difference between coasting downhill on a bike and pedaling uphill; it can raise people’s stress levels.

“Cultural disfluency can facilitate a shift to systematic mindset and set up feelings of distrust and suspicion with potentially problematic consequences depending on the context,” the researchers warned.

Prior psychology studies have contrasted how culture differs between groups, but Oyserman said the researchers for this study sought to explore how culture affects reasoning.

Cultural disfluency can be thought of as part of culture shock. Oyserman said this is an especially important consideration for countries now accepting thousands of migrants and refugees from areas of conflict such as Syria or Afghanistan. The migrants and the long-time residents have expectations based on a cultural script that the other does not know. Moments of cultural disfluency are sure to accrue and increase stress levels even for residents in those countries who are accustomed to its culture and traditions, she said.

The study was published online on Aug. 31 by the journal Social Cognition.

Bats and pumpkins on Labor Day

The researchers ran a series of experiments using holidays, weddings and funerals. The first two took place at the Midwestern home of lead author James Mourey’s mother during her annual July Fourth and Labor Day picnics.

Mourey, then a doctoral student at the University of Michigan and now of DePaul University, brought plates to the picnics. For the July Fourth party, some white plates were randomly mixed into the stack of plates decorated in stars and stripes. For the Labor Day study, some plates with Halloween pictures of bats and pumpkins were randomly mixed into the stack of patriotic plates. The food was served buffet-style to the 19 guests on July Fourth and 26 guests on Labor Day weekend.

“At the end of the row of the array of foods was chatty Jim who grabs your hand and says, ‘It’s so great to see you,’” Oyserman said. “He eases the plate out of your hand to put it on a thin scale sitting underneath a tablecloth so you wouldn’t notice. Neither his mother nor the guests knew what was going on.”

Americans were asked to rate photographs taken at actual weddings. Half were shown photos of a traditional-style or “culturally fluent” wedding – a groom in a black tux, bride in a white dress, and a typical tiered cake. The other half were shown photos of non-traditional, or “culturally disfluent” wedding – a bride in a green dress, a groom in a purple tux and a cake decorated with gears.

There were three groups of participants, ranging in number fro 69 to 132 participants. In one group, participants took a cognitive reasoning task after viewing the photographs. Those who saw the traditional wedding made more reasoning errors.

In the two other groups, researchers asked the subjects to help with another study and rate their interest in purchasing products. Although the products, such as a snow shovel, seemed unrelated to weddings, people who saw the traditional wedding photos were more interested in purchasing the items, which Oyserman said shows that cultural fluency increases mindless consumption.

Undergraduate students, 76 in Hong Kong and 73 in the U.S., took a cognitive reasoning test either on Valentine’s Day or on Feb 21. They read and completed the questions on a computer screen that had either a black, white or pink border.

“It turns out pink makes you stupid but only on Valentine’s Day,” Oyserman said. “A week later, pink is just a color.”

A total of 463 Americans were asked to choose which obituary “read better.”

Some participants then took a cognitive reasoning test. Others were asked to consider whether they would buy a key fob that could help find lost keys or a keychain cellphone charger.

Although these experiments seem like minor scenarios, they demonstrate what happens when things are even a bit off track Oyserman said.

“We are used to thinking about culture shock as negative and something that happens to those who move, but the disfluency that results in culture shock has some positive consequences for thinking,” Oyserman said. “Disfluency can also occur for people who haven’t moved, especially if there are large groups of others who are using a different cultural script are arriving at their shores. For them, those moments of what should be cultural fluency are harder to predict.”

The study’s co-author was Ben C.P. Lam of Iowa State University. The research was funded in part by a Humboldt Foundation award to Oyserman.