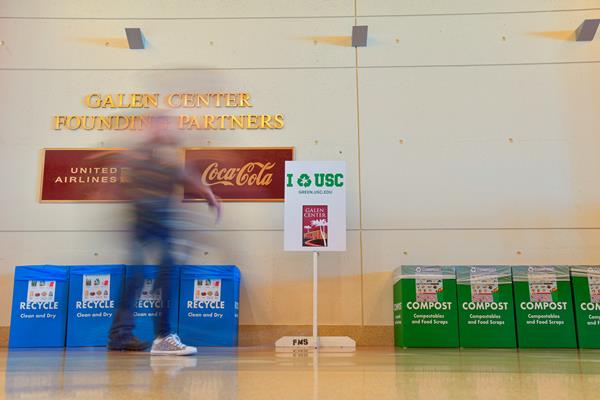 USC Athletics continues to pace the university’s sustainability efforts, this time in concert with other universities and a United Nations program to help curb emissions linked to climate change.

It is the fifth U.S. collegiate athletic department to commit to the U.N. framework, which spells out measures needed to slow global warming, leverage fans and sponsors, and protect the health and safety of athletes. Other universities include the University of Colorado Boulder, the Ohio State University, the University of Miami and Wake Forest University.

“In alignment with USC’s bold vision for sustainability, we are thrilled to become the fifth collegiate athletic department to join this important initiative,” said USC Director of Athletics Mike Bohn. “We support the plan outlined in the Sports for Climate Action framework, and we commit to working collaboratively with our peers and relevant stakeholders to drive climate action and awareness through sports.”

The Sports for Climate Action initiative is part of the U.N. Framework Convention on Climate Change, or UNFCCC. The program commits the global sports community to combat climate change through commitments and partnerships according to verified standards, including measuring, reducing and reporting greenhouse gas emissions. Most of the world’s countries endorse the goal of the UNFCCC to stabilize greenhouse gas concentrations “at a level that would prevent dangerous anthropogenic (human-induced) interference with the climate system.”

Last year, 1,500 solar energy modules were installed on the Galen Center roof to supply about 15% of the arena’s electricity, making it the biggest solar power project at USC. Additionally, more than 3,000 LED light bulbs were put into the arena and a “pony chiller,” which is a small, efficient motor, was added to its cooling units; the energy conservation measures help reduce USC’s greenhouse gas emissions.

“Athletics is one of USC’s biggest — and earliest — sustainability champions,” said Ellen Dux, associate director of the USC Office of Sustainability. “Participation in the U.N. Sports for Climate Action framework, plus the many other actions already undertaken by the athletics program, demonstrates our commitment to address climate change as we integrate sustainability principles into daily operations.”

Sustainability has been a USC priority since President Carol L. Folt arrived in late 2019. Among university sustainability goals are the elimination of single-use plastics, a reduction of greenhouse gases, expansion of waste diversion and more charging stations for electric vehicles.

This year, the university is participating for the first time in the national Sustainability Tracking, Assessment and Ratings System that measures, monitors and manages USC’s environmental progress. That methodology and reporting system complements the U.N. Sports for Climate Action program.