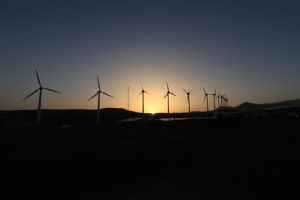 USC researchers partner with the U.S. Energy Department and city of Los Angeles to help chart a course to a zero-emissions future for the city — one of the biggest studies of its kind by the federal government.

Powering Los Angeles entirely with renewable energy can be accomplished without significant disruption to the economy or lifestyles over the next 25 years, if not sooner, according to new research conducted by USC experts for the city and federal government.

The new “LA100 The Los Angeles 100% Renewable Energy Study” was released Wednesday by the U.S. Department of Energy’s National Renewable Energy Laboratory (NREL).  The report concludes the city may reach its ambitious goal to convert entirely to renewable energy by 2045 through rapid deployment of wind and solar power, electrical storage and other technologies.

Moreover, the study says that by 2030, the electrical power generation sector can achieve dramatic reductions in greenhouse gases – from 76% to 99% less than 2020 levels – if L.A. begins in earnest now.

A USC partnership for a sustainable future

The study was prepared in a partnership between the city Department of Water and Power and NREL. USC professors at the Price School of Public Policy and the Viterbi School of Engineering, as well as experts at other universities, contributed to the report.

“We can get to 100% renewable energy by 2045. It will be hard, but it can be done,” said Kelly Sanders, associate professor of civil and environmental engineering at the Viterbi School. “We have the technical ability to do it, and it will involve a lot of changes that will affect everything from our water supply to buildings, transportation to energy production.”

The study addresses issues including: the best path to reach 100% renewable energy reliably and cost-effectively; greenhouse gas emissions (GHGs) reductions; health and economic impacts; and impacts for low-income and disadvantaged communities. Currently, the city gets about half its power from carbon-free energy.

The contributing USC professors include Sanders and George Ban-Weiss of the USC Viterbi School, and Adam Rose and Dan Wei of the Price School of Public Policy and Schwarzenegger Institute. Professors at Colorado State University also contributed.

Here is a summary of the USC researchers’ findings:

Economy and jobs. L.A.’s switch to renewable energy would likely have minimal impacts on the economy, USC researchers project. Job impacts would be minimal in percentage terms because the region’s economy is so massive. The USC economists’ model shows that, in the worst-case scenario, average annual job losses could total about 3,600 over the entire planning period. But a moderate scenario shows gains of about 4,700 jobs annually between 2026 and 2045. The differences depend on a mix of factors, including the compliance year for 100% renewable energy, whether the use of tradable renewable energy credits is allowed, whether biofuels are included in the technology mix, and other factors. In either instance, those impacts reflect changes of less than one-half of 1% to the L.A. economy.

The researchers project some 8,600 construction jobs annually to build production and transmission facilities for wind, solar and geothermal power. Another 2,000 maintenance jobs would accrue in 2026 to 2045.

“For various alternative technology scenarios examined in the study, there could be slight positive or negative impacts compared with the minimal compliance scenario, but the changes are small compared to the 3.9 million jobs and $200 billion in annual output in the L.A. economy overall and thus have an almost negligible impact,” Wei said.

Water supply. Ensuring a safe and reliable water supply in L.A. will cost DWP more energy in the future. The challenge lies in L.A.’s Green New Deal, which aims to source 70% of the city’s water locally and recycle all of the city’s wastewater by 2035, according to the study. However, since water can be treated and stored, the water sector could be a valuable asset for integrating high fractions of renewable energy into the grid if electricity consumed for treatment and pumping could be timed with periods when wind and solar are abundant.

Although less electricity would be needed to move water from the Colorado River or Owens Valley, reducing these water imports by creating more local water supplies would require more electricity sourced locally from DWP for developing new local water projects through advanced wastewater treatment, groundwater recharge, stormwater management, and water recycling projects. LA100 anticipates that by 2050, the total electricity consumed by the city for its water system could increase 3 to 5 times current levels to meet its sustainable water goals. Overall, the proportion of the projected load for water would grow slightly from about 1.3% to 3.2% over the study period.

Air quality and health. Zero-emissions technologies are good news for air quality and health. The researchers found that emissions of nitrogen oxides from the sectors investigated in the study could be reduced by 86% to 95%, depending on the pathway followed. Emissions of fine particulate matter, or PM2.5, could be reduced by 38% to 62%. The emissions reductions were driven by electrification of vehicles, buildings and the Port.

“The air pollution improvements would save lives and reduce pollution-induced illness. It would be noticeable, the sky would look cleaner,” said USC professor Ban-Weiss.

A far-reaching study of the urban future

NREL is the Energy Department’s primary laboratory for clean-energy sources. The LA100 study is the biggest and most complex report NREL has produced for a municipality, due in part to the size of Los Angeles and the fact the city’s utility, DWP, owns its own generation, transmission and distribution system. It is hoped that the study can aid other big cities in similar efforts, as outlined in the Biden administration’s plan for sustainable infrastructure and transitioning to clean energy.