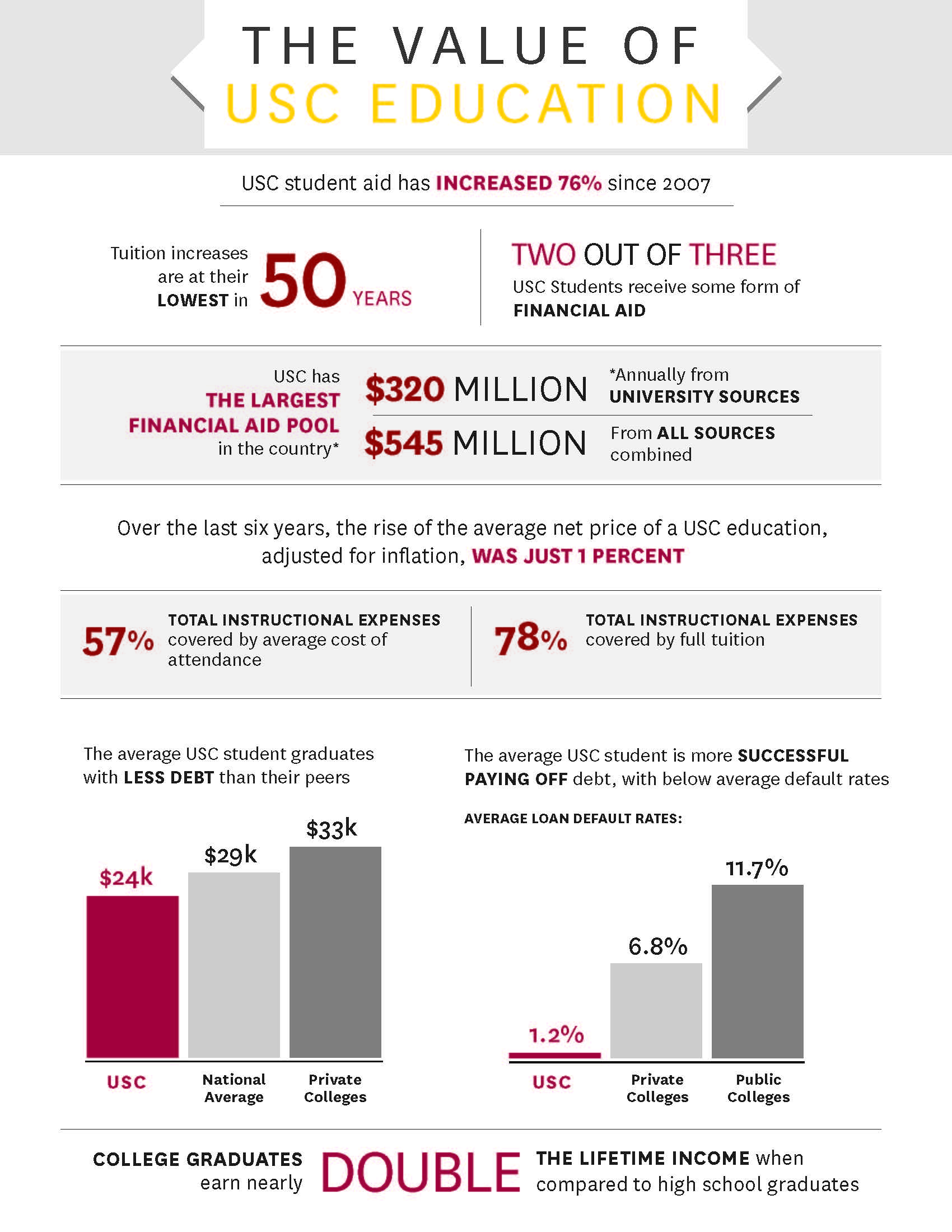 The USC Board of Trustees approved a 3.9 percent increase in undergraduate tuition for the 2017-18 academic year, and reaffirmed its longstanding commitment to maintain one of the nation’s largest financial aid pools and access for qualified students.

USC tuition increases are at a five-year average low. Over the last six years, the rise of the average net price of a USC education, adjusted for inflation, was just 1 percent. USC’s average net tuition is ranked 134th out of all private, non-profit four-year universities thanks to its generous financial aid packages. The new charges for undergraduate tuition during the 2017-18 academic year will total $53,448.

“The value of a USC degree keeps getting stronger,” said Provost Michael Quick. “We want to create a high-touch environment that ensures all students have access to the world’s best faculty, academic programs that prepare them for the 21st Century, high-value internships and career services, and an exceptional residential college experience. I am proud that we provide ways to lessen the impact of a tuition increase with financial assistance so that we can continue to provide new and returning students with a challenging and relevant USC education.”

USC has established one of the largest financial aid pools in the country, with more than $320 million awarded last year from all USC sources, up from $180 million a decade ago. Increases in financial aid at USC consistently outpace increases in tuition. Since 2009, the percentage of university aid rose at double the percentage of tuition increases.

Nearly two-thirds of all USC students receive some form of financial aid. The university’s need-blind admission process helps identify the best students, regardless of their ability to pay. This helps increase access to the university for students from all backgrounds: 22 percent are underrepresented minorities, 21 percent are eligible for Pell Grants and 14 percent of the undergraduate student body are the first in their family to attend college. USC is among the leading private universities in its generous support for these groups of students.

Because of the university’s commitment to affordability, students leave USC with lower-than-average student debt. USC students accumulate about $24,000 in debt during their tenure at USC as compared to the national average of nearly $33,000 for private colleges and about $29,000 for all universities. In addition, borrowing by USC students has decreased over the last few years, although that decision is left to individual families.

“USC has continued to increase our university aid to allow all qualified students to study here – whether they come from low-income or middle-income families,” Quick said. “We take seriously our obligation to make this university accessible to all students who have worked hard to get here and who add tremendously to our campus culture.”

The university covers the gap between revenue and cost as part of its commitment to a superior undergraduate experience. USC is a major research university that offers low class sizes and high graduation rates, both of which are more common to small, private colleges. The university’s student-focused approach results in outcomes far better than those of its peers. USC has a six-year graduation rate of 92 percent, well above the national average of 65 percent for private non-profit universities and 60 percent for public universities.

According to the Wall Street Journal/Times Higher Education survey of more than 1,000 U.S. colleges and universities, USC ranks 15th nationally and 3rd among the 150 universities surveyed in the west. The university ranks 2nd in diversity among its private peer universities.