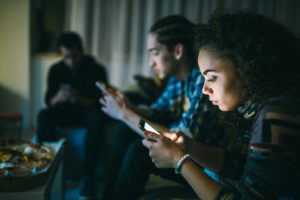 USC research suggests that viewing viral videos of police shootings and detained immigrants is associated with depressive and PTSD symptoms in adolescents of color.

Social media-based movements like #BlackLivesMatter and #SayHerName have taken off over the past decade as a response to highly scrutinized police shootings of African American people. Recordings from body cameras or bystanders are frequently posted online and shared by activists and others as a way to press for police accountability.

But those videos may also have deleterious effects on the mental health of young members of the same racial communities as the victims in those shootings, suggests a new study published today in the Journal of Adolescent Health.

Previous research has linked exposure to violent media with trauma, and other research has connected actual police killings in a given region to poor mental health in same-race communities. Study authors say this study is the first to explore the relationship between repeated youth exposure to traumatic events online with mental health.

“Increased exposure to traumatic events online, whether they involve members of one’s own racial-ethnic group or those of other racial-ethnic groups, are related to poor mental health outcomes,” said lead author Brendesha Tynes, an associate professor of education and psychology at the USC Rossier School of Education.

Data were collected from a nationally representative sample of 302 Black and Hispanic adolescents ages 11-19. African American and Hispanic participants were asked about police shootings, immigrants being detained by federal agents and beatings.

Study participants reported the frequency of their exposure to traumatic events online, depressive symptoms, PTSD symptoms and other demographic information.

“The study shows that the increase in depressive and PTSD symptoms crosses racial and ethnic lines – in other words, the mental health of both African American and Latinx teens may be linked to viewing any racial violence, not just that which depicts their own racial or ethnic group,” Tynes said.

The role of mental health professionals and educators

Given such high internet use, the researchers suggested that mental health professionals and educators have conversations with young people of color about their exposure to racial violence online, and that those professionals should also take steps to improve their own cultural competency.

“The videos of these injustices should be public and people should continue to record and post them,” Tynes said. “The findings show that mental health problems are exacerbated with exposure, so viewers should be mindful of their viewing practices, auto-play settings and how they think about the event after they’ve seen it. They should exhaust all technological, personal and community resources to protect themselves and thrive in the face of these seemingly ubiquitous events.”

The study was co-authored by USC Rossier School research assistants Ashley Stewart and Matthew Hamilton and by Henry A. Willis, a research assistant at the University of North Carolina–Chapel Hill. The research was funded by a Zumberge Diversity and Inclusion (D&I) in Research Award. The James H. Zumberge Research and Innovation Fund is USC’s university-wide faculty research grant support mechanism.