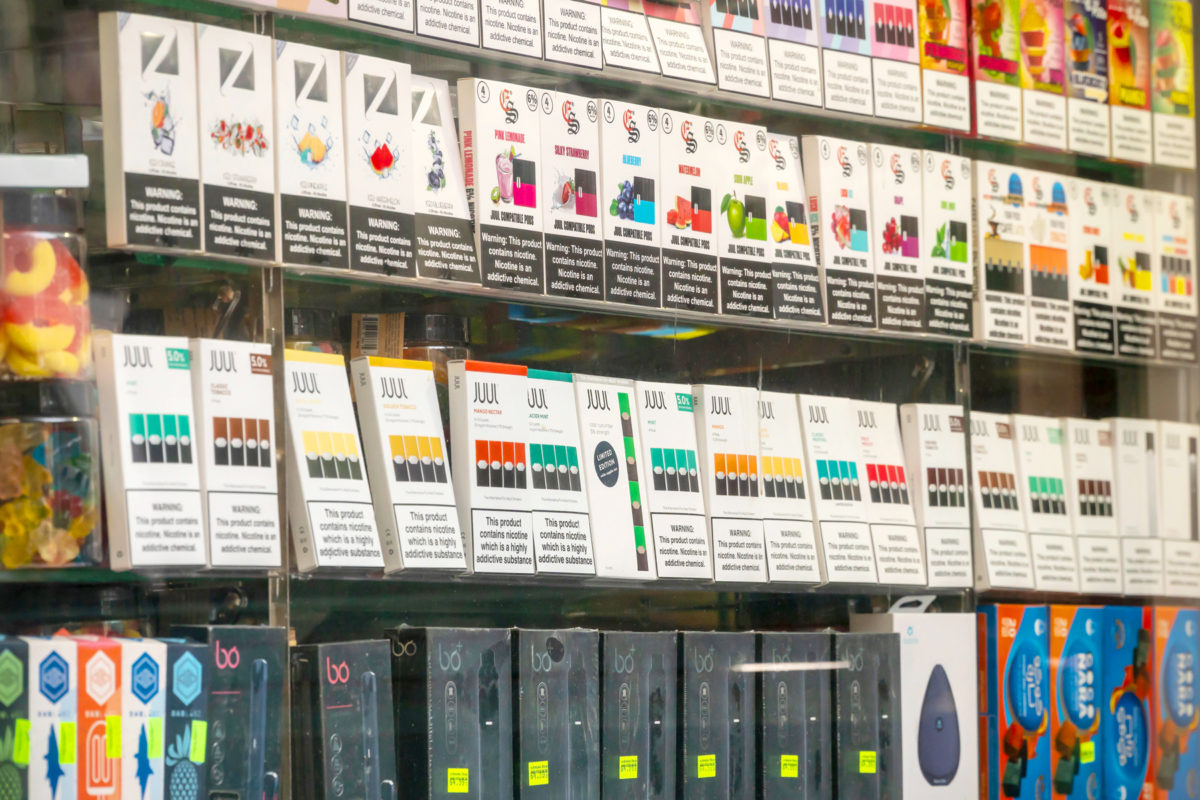 A selection of the popular Juul brand vaping supplies and third-party replacement pods for sale. (Photo/Richard B. Levine, Alamy)

A new study has found that teens who vape candy- or fruit-flavored e-cigarettes are more likely to stick with the habit and vape more heavily, implicating flavors in the teen vaping epidemic.

The study — published online Monday in Pediatrics, the journal of the American Academy of Pediatrics — could bolster calls for federal restrictions on flavored e-cigs. The products continue to be sold widely more than a month after the Trump administration announced a plan to clear the market of e-cigarettes in flavors other than tobacco. Juul, the market leader, voluntarily pulled its some of its flavored products.

“While many children try e-cigarettes, not all become regular users. Teens who use e-cigarettes may be more inclined to continue vaping rather than just temporarily experiment with e-cigs,” said Adam Leventhal, director of the USC Institute for Addiction Science and professor at the Keck School of Medicine of USC. “Whether or not children continue vaping is important — the longer and more frequently you vape, the more you’re exposing yourself to toxins in e-cigarette aerosol and putting yourself at risk for nicotine addiction.”

The youth in this study using e-cigarettes in these fruity, sweet or buttery flavors also went on to heavier patterns of use six months later, reporting taking more puffs each time they vaped. The number of days or times teens vaped did not consistently differ based on the flavor they used.

“Regulations that reduce youth exposure to flavored e-cigarettes may aid in preventing young people who try e-cigarettes from becoming long-term e-cig users, and also from inhaling more of aerosol into their lungs,” Leventhal said. “Regulations like these could also encourage the millions of U.S. adolescents who already use e-cigarettes to quit vaping, especially if they can no longer access e-cigs in the flavors they like.”

In addition to Leventhal, the study’s other authors are Nicholas Goldenson, Junhan Cho, Matthew Kirkpatrick, Rob McConnell, Raina Pang and Jessica Barrington-Trimis, all of the Keck School of Medicine of USC; Matthew Stone of University of California, San Diego; and Janet Audrain-McGovern of the University of Pennsylvania.

The study was supported in part by a Tobacco Centers of Regulatory Science award (U54CA180908) from the National Cancer Institute and Food and Drug Administration, the National Institute on Drug Abuse (grants F31DA043303, K01DA040043, and K01DA04295) and the Tobacco-Related Disease Research Program (grant 27-IR-0034).