The fossil fuel fight goes on for USC scientists as they develop a new method for creating reversible hydrogen storage based on methanol, with no carbon emissions, in the last major paper co-authored by USC’s first Nobel laureate, the late George Olah. (Image credit: Sayan Kar)

Scientists have long struggled with generating and storing hydrogen, the kind that might one day provide the backbone for renewable energy fuel cells that make our cars move, warm our houses and help produce food, in a way that also won’t hasten climate change or otherwise harm the environment.

In research published earlier this year in the Journal of the American Chemical Society, chemists at the USC Loker Hydrocarbon Research Institute outlined a carbon-neutral method for doing just that, with a little help from the simplest alcohol known to man: methanol.

Senior author G. K. Surya Prakash, 1994 Nobel Prize in Chemistry winner George Olah in his last major paper and their team at the USC Dornsife College of Letters, Arts and Sciences devised a way to produce and store hydrogen from methanol, without concurrent production of either carbon monoxide or carbon dioxide, by trapping it in organic derivatives of ammonia called amines.

The research demonstrates just one more way carbon has been freed from the cycle of creating and storing fuels via methanol, supporting Olah and Prakash’s long-standing vision of a completely renewable “methanol economy.”

“The Methanol Economy” is a concept that the Olah-Prakash team first began refining in the mid-1990s, right after the time Olah became USC’s first Nobel laureate for his contributions to carbocations, the name that Olah himself coined for ions that have a positively charged carbon atom.

According to Olah and Prakash, the goal of a methanol-based economy would be to develop renewable sources of energy, led by methanol, that could mitigate the problem of climate change caused by carbon emissions, as well as the U.S. dependence on other countries for energy, particularly oil.

The need to offset crude oil consumption has only grown in the intervening decades since Olah and Prakash began their research. At that time, global consumption of oil was around 70 million barrels; that number is expected to be about 100 million as early as next year.

Countries like China have already begun the transition away from petroleum. At the beginning of the century, methanol use there was negligible but now accounts for more than 500,000 barrels each day, though much of it is coal-based, which can create its own problematic carbon runoff.

The research of Prakash, Olah and their team has been focused on finding a way to extract hydrogen fuel from methanol in ways that are not only carbon-neutral, but can even be carbon-positive.

Methanol, sometimes called “wood alcohol,” is the simplest alcohol that can be produced, requiring only water, carbon dioxide and energy.

While methanol stores half the energy of traditional petroleum-based gasoline, the light that burns half as bright also burns more cleanly, with no soot, particulates or other residue.

According to the Environmental Protection Agency, the combustion of methanol also generally produces less deleterious greenhouse gases in the form of nitrogen oxides.

Methanol quickly biodegrades. It has traditionally been produced from natural gas and can be corrosive to older automobile tubing and casing, though much less so to newer generations of automobiles. Methanol is a more efficient fuel to replace gasoline or diesel, but it provides fewer miles to the gallon because of its lower energy density.

Methanol has also long been prized by race car drivers for its higher octane on shorter tracks and because it produces clearer smoke, preventing pileups. Also, unlike typical petroleum-based gasoline, water is effective in fighting methanol-based fires, though those clean-burning fires often appear invisible in daylight. However, additives can also easily be added to methanol to increase visibility.

Methanol is also already employed in the raw chemical production of all petroleum-based chemicals and products.

The renewable energy fight goes on 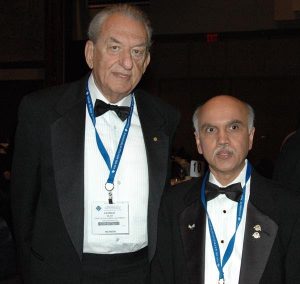 In a testament to its elegance, simplicity and ubiquity, methanol naturally occurs in small amounts in the Earth’s atmosphere, and there are even huge clouds of it floating in the star-forming regions of space. Olah, Prakash and colleagues published research last year examining the differences between the formation of methanol both terrestrially and extraterrestrially.

Prakash, who worked with Olah for more than 40 years, said of his research mentor and partner, “Olah was a giant of a chemist and a great visionary who had a prophetic approach to solve tough problems. He had remarkable memory and was quite intuitive. He was very well-read, he knew history and philosophy and appreciated music and the arts. He was a voracious reader. He can be described as a Renaissance man.”

The research was supported by the USC Loker Hydrocarbon Research Institute and can be found online at http://pubs.acs.org/doi/abs/10.1021/jacs.6b11637.