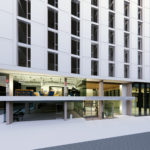 KDFC-FM, the Bay Area’s USC-owned classical music radio station, has announced that its new home will be named the Batishwa Miner Broadcast Center in honor of the mother of the late listener and supporter Gloria Miner.

“When Classical KDFC became a listener-supported station 10 years ago, Gloria was one of the first people to call me and offer to help,”  KDFC President Bill Lueth says. “She was a long-time, dedicated champion of KDFC and our local arts community and has left a lasting impact.”

Said Gloria’s nephew, Ed Miner: “I’m sure Gloria would be so happy to have the broadcast center bear her mother’s name, Batishwa Miner. Gloria absolutely loved Classical KDFC and having classical music being heard far and wide.”

The new KDFC space will be housed at the San Francisco Conservatory of Music’s Bowes Center, now under construction. The conservatory invited the 70-year radio institution to join them in their new facility at 200 Van Ness Avenue across from Davies Symphony Hall in the San Francisco Arts District. The KDFC studios on the second floor are slated for completion in early 2021.

Your Window to the Music

Classical KDFC has launched a campaign to fund the new station space and to create programs that connect classical music to the community. Before her death earlier this year, Gloria Miner donated a leading gift to the campaign. With this generous donation secured, the station is now actively seeking public support starting with a $500,000 dollar-for-dollar challenge offered by an anonymous donor.

KDFC became a listener-supported local arts institution in 2011. In its new home, closer proximity to the city’s premier performing arts groups will allow KDFC to expand its outreach and programming to include pre-performance talks and soirees for interested music lovers visiting the central arts district.

KDFC will be anchored in the heart of the conservatory’s professional development activities and the station will create new collaborations with both students and the community of young talent from across Northern California. The station also will be able to reach a broader audience by tapping into the new performance spaces of the Bowes Center, which will be wired into KDFC’s studios to share performances and other activities on the radio and through its various digital platforms.

KDFC is part of the USC Radio Group, a network of 10 California classical-music stations that includes KUSC-FM in Los Angeles. To donate to the fundraising campaign, visit their website.

For more information about “Your Window to the Music,” contact Lori Burrill at lburrill@kdfc.com (949) 439-8582