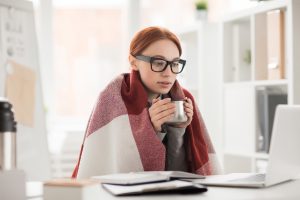 Turning up the thermostat at the office may result in higher productivity for women, a new USC study finds.

The study suggests that gender is an important factor not only in determining the impact of temperature on comfort but also on productivity and cognitive performance. The study — authored by Tom Chang, associate professor of finance and business economics at the USC Marshall School of Business, and Agne Kajackaite of WZB Berlin Social Science Center in Germany — was published today in PLOS ONE.

“It’s been documented that women like warmer indoor temperatures than men, but the idea until now has been that it’s a matter of personal preference,” Chang said. “What we found is it’s not just whether you feel comfortable or not, but that your performance on things that matter — in math and verbal dimensions, and how hard you try — is affected by temperature.”

The results have implications for economic productivity as well as for building design, a field that has focused in recent years on designing more energy-efficient buildings. 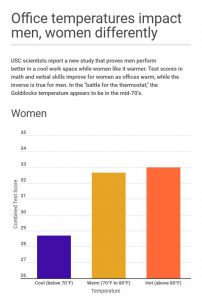 Warmer was better for women’s math and verbal scores

A total of 543 students participated in the laboratory experiment, which was conducted in Berlin. For each session, room temperatures were set at various increments ranging from about 61 degrees Fahrenheit to about 91 degrees Fahrenheit.

The authors found a meaningful relationship between room temperature and how well participants scored on the math and verbal tasks, while temperature had no effect for men and women on the cognitive reflection test.

“One of the most surprising things we learned is this isn’t about the extremes of temperature,” Chang said. “It’s not like we’re getting to freezing or boiling hot. Even if you go from 60 to 75 degrees, which is a relatively normal temperature range, you still see a meaningful variation in performance.” 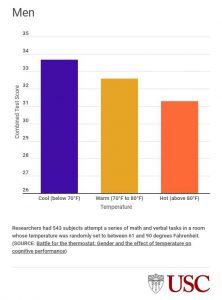 The authors say the results “raise the stakes for the battle of the thermostat,” suggesting where to set the temperature it is not just about comfortability, but also about cognitive performance and productivity. They say their findings suggest that, in mixed gender workplaces, the temperatures should be set significantly higher than current standards to increase productivity.

“People invest a lot in making sure their workers are comfortable and highly productive,” Chang said. “This study is saying even if you care only about money, or the performance of your workers, you may want to crank up the temperature in your office buildings.”