Racial segregation in neighborhoods is higher for families with children than those without, a new USC study shows.

“Neighborhood racial segregation has been in decline since the 1970s, but my findings show it declined more slowly among families with kids,” said USC Assistant Professor Ann Owens, who analyzed 2010 and 2000 U.S. Census data to examine racial segregation trends in 100 major metropolitan areas.

“This means that children are surrounded by greater racial homogeneity in their neighborhoods than adults,” added Owens, a sociologist at the USC Dornsife College of Letters, Arts and Sciences. “A lack of diversity could have a significant effect on the development of their racial attitudes and future education and employment.”

In neighborhoods, housing and urban policies have been key for curbing segregation, she said. The Affirmatively Furthering Fair Housing Act of 2015, for example, reiterated the aims of the Fair Housing Act of 1968, requiring municipalities that receive federal housing funds to conduct fair housing assessments.

“The progress made in integrating neighborhoods could be thwarted by policies or policymakers’ efforts to dismantle these efforts,” she said. “Because neighborhood racial segregation remains higher among children than adults, children may face greater consequences of any rollbacks of support for fair housing policies.” 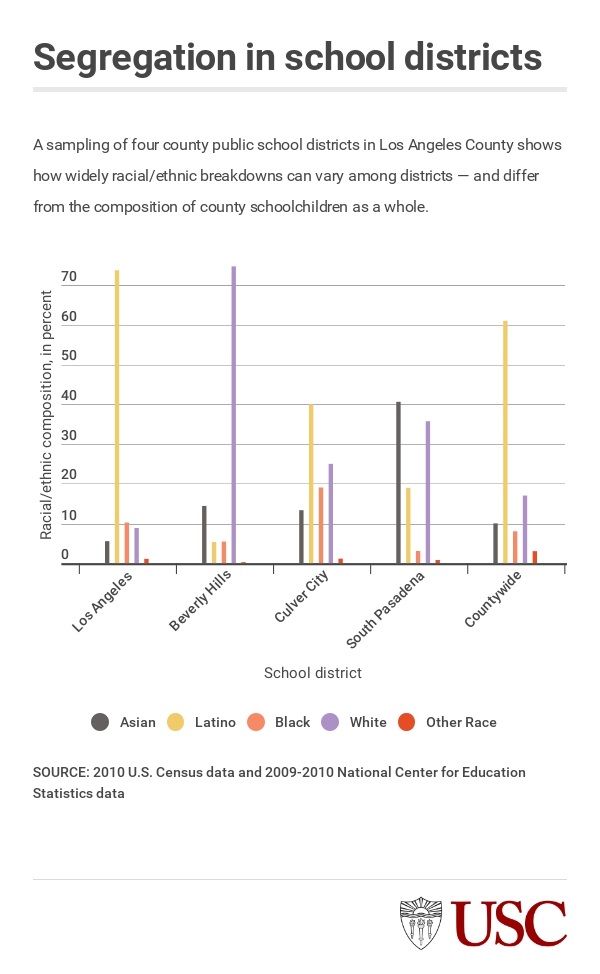 For the study that was published on March 16 in The Russell Sage Foundation Journal of the Social Sciences, Owens estimated school-age children’s exposure to white and minority children within neighborhoods, and then compared it to adults’ exposure. Owens also measured “evenness” – how whites, blacks, Latinos, Asian-Americans and others sort across neighborhoods. Both measures of segregation indicate that children are more racially segregated between neighborhoods than adults, with white children living in slightly more white neighborhoods than white adults.

Although segregation has declined overall, it is lingering. Owens said its continuation is a concern because segregation can be detrimental for child wellbeing. Scientific research has shown that low-income and minority children who grow up in segregated neighborhoods and attend segregated schools have worse educational and economic outcomes than children in more integrated areas, she said. High levels of residential segregation have been linked to lower levels of income mobility across generations.

Segregation despite an increase in minorities

Among the 100 largest metropolitan areas, Los Angeles has one of the highest rates of segregation between white and Latino children, even after adjusting for the large Latino child population in Los Angeles, Owens said.

In 2010, Latino children, on average, lived in Los Angeles neighborhoods where 75 percent of the children in their neighborhood were also Latino and 9 percent were white.

“If segregation were not occurring, then all children would live in neighborhoods and attend school in districts with this majority Latino, minority white ratio,” Owens said.

Owens said like the neighborhoods, school districts in Los Angeles County also do not reflect the county’s demographic makeup.

Miami is similar to Los Angeles in demographic makeup. Even so, it had a lower level of segregation between white and Latino children. Both Latino and white children in Miami in 2010 lived in neighborhoods where, on average, more than 60 percent of the children were Latino.

The Miami metropolitan area has one large school district. Owens ventured that segregation may be lower there because parents who live and work in Miami are less concerned than Los Angeles-area parents with having to live in a neighborhood that feeds into a particular school district.

Drivers of the divide

Demographic trends may contribute to some of the difference in children’s and adults’ neighborhood diversity, Owens said. In 2010, 67 percent of the U.S. adult population was white, compared to only 54 percent of the child population. These trends signal that over time, younger generations will likely experience more exposure to Latino peers than adults do, Owens said.

Neighborhood racial diversity is also influenced by the factors that families, with and without children, consider when selecting where to live. Families with children appear more concerned about what school district their neighborhood is linked to, and they may even consider race as a factor, Owens said.

“White parents may be avoiding school districts where black and Latino children live because they use racial composition as a proxy for quality of a school and a neighborhood,” she said.

Minority families may have different priorities in deciding where to live, Owens suggested as explanations for the differences between households.

“Black and Latino families have lower incomes on average than white families, and they face housing market discrimination that influences where they live, regardless of the high value that they may place on school options,” Owens said.

When choosing a house or apartment, minority families may prioritize safety, home or apartment amenities, and the home’s proximity to child care and employment over schools or other considerations.

“Minority parents also may evaluate schools differently than white parents and prefer schools where their children are not the minority,” Owens wrote.

“As long as neighborhoods are demarcated by school district boundaries limiting enrollment options, parents will take these boundaries into account when making residential choices, which may contribute to segregation between white and minority children,“ Owens wrote.