Fish get arthritis, too

Scientists could use zebrafish to accelerate arthritis research.

The very first bony fish on Earth was susceptible to arthritis, according to a USC-led discovery that may fast-track therapeutic research in preventing or easing the nation’s most common cause of disability.

The finding contradicts the widely held belief that lubricated joints enabling mobility — called synovial joints — evolved as vertebrates ventured onto land. For example, human knees and hips have synovial joints, which are highly susceptible to osteoarthritis.

Pixar’s Dory, zebrafish and other ray-finned fish have synovial joints that can get creaky. Thus, these fish are susceptible to arthritis.

“Developing the first arthritis model in the zebrafish — an emerging regenerative model for medical research — opens up fundamentally new approaches toward finding a cure for arthritis,” said Gage Crump, senior author and an associate professor of stem cell biology and regenerative medicine at the Keck School of Medicine of USC. “While arthritis is the leading cause of disability in the United States, there are no treatments beyond artificial joint replacement. Our research offers new hope for finding a biological cure.”

Amjad Askary and Joanna Smeeton from Crump’s laboratory have found that certain joints in the zebrafish jaw and fins have features that resemble the synovial joints found in mammals. The similarity makes sense because water resistance places considerable strain on joints. The study will be published in the journal eLife on July 19.

Arthritis affects more than 52 million people or about 23 percent of adults, according to the Centers for Disease Control and Prevention. Aging baby boomers will spike that number to 78 million – or about 26 percent of adults – by the year 2040. 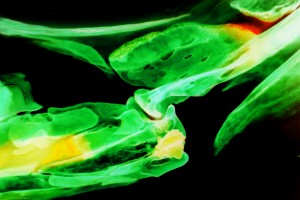 Four-limbed bony vertebrates such as humans evolved from lobe-finned fish. However, a good laboratory model for this group does not exist, so instead the researchers focused their inquiry on zebrafish, a member of the more evolutionarily distant ray-finned fish.

Using CT scans and genetic tools, the scientists noted that two other ray-finned fish – the three-spined stickleback and the spotted gar – also have synovial joints that produce a protein very similar to what lubricates joints in humans. It is aptly named Lubricin.

Given that fish and humans diverged hundreds of millions of years ago, when bony vertebrates first evolved, this similarity in arthritis susceptibility reveals that synovial joints are at least as ancient as bone itself. 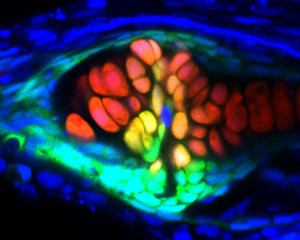 “Creating the first genetic osteoarthritis model in a fish is exciting,” Crump said. “Going forward, it will be fascinating to explore whether the zebrafish, which is well known for its regenerative abilities, can also naturally repair its damaged joints.”

Support came from a California Institute for Regenerative Medicine Training Fellowship and a Wright Foundation Award.