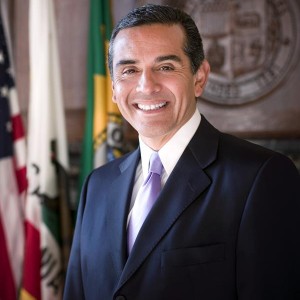 Los Angeles – October 25, 2013 – The USC Price School of Public Policy has appointed Antonio R. Villaraigosa, 41st Mayor of Los Angeles, as a professor of the practice of policy.

Villaraigosa, whose appointment became effective on Monday, will work on innovative, large-scale approaches to the significant policy issues facing California.

Jack H. Knott, dean of the USC Price School of Public Policy, said: “Throughout his tenure as mayor of the city of Los Angeles, Antonio Villaraigosa made significant progress in policy areas that are critically important to the USC Price School, including transportation and infrastructure development, public safety, port security and the environment. His wide range of knowledge and hands-on experience in these areas and others, including education and governance, will serve as a great asset to the USC Price School’s ongoing work and research.”

The title of professor of the practice is reserved for faculty appointments of individuals who have made significant contributions in the public practice of their field of expertise. Villaraigosa’s policy achievements as mayor included the expansion and reform of the Los Angeles Police Department, major improvements in public transportation, and the introduction of green technologies to the ports of Los Angeles and Long Beach.

Mayor Villaraigosa said: “The Price School is one of the nation’s leading policy schools, with particular strengths in my own policy interests, such as transportation and infrastructure development. I am excited about working with the school to propose solutions to some of the state’s and nation’s critical policy challenges.”

One of Villaraigosa’s first projects will be to lead the newly-formed USC Villaraigosa Initiative for Restoring the California Dream, an initiative that will point to “important ways forward” through forums and reports on major policy issues and the functioning of state government, including public-private partnerships and social innovation, Knott said.

Villaraigosa will collaborate with the USC Price School’s nationally recognized research centers, including the METRANS Transportation Center – which recently received an additional $10.5 million in state and federal grants – and the Judith and John Bedrosian Center on Governance and the Public Enterprise.

He also will lecture in graduate and undergraduate courses in subjects ranging from sustainable planning to public sector executive management.

“We have many students who aspire to be mayors or city managers or work for the state government, so Villaraigosa’s role leading the second largest city in the country will be hugely valuable to us,” Knott said. “It’s very important that our faculty and students stay connected to the world of practice. As a professional school, having real world leaders engage with us is critical to our success.”

Villaraigosa served as Mayor of Los Angeles from 2005-2013 and was the city’s first Latino mayor since 1872.

Upon taking office, Villaraigosa took on some of the city’s most pressing challenges, including education, public safety and transportation. He sought advancements in economic development and the environment while building broad coalitions across ideological and ethnic lines. Villaraigosa’s accomplishments include creating a partnership that spurred gains among the city’s underperforming schools; putting 1,000 new police officers on the streets, with crime dropping to its lowest level in 60 years; supporting Measure R, which provided $40 billion to build new rail projects; and drastically reducing air pollution emissions by taking thousands of diesel trucks off the road in the Ports of Los Angeles and Long Beach. As President of the U.S. Conference of Mayors, Villaraigosa became a national spokesman for education reform and expanded investment in America’s transportation infrastructure.

Prior to becoming mayor, Villaraigosa served three terms in the California State Assembly and in 1998 was elected the first Speaker of the Assembly from Los Angeles in 25 years. While Speaker, Villaraigosa oversaw passage of landmark state legislation including the modernization of public schools, the toughest assault weapons ban in the country, the largest urban neighborhoods parks initiative in America and the “Healthy Families” program that provides healthcare for over a half a million children.

The USC Price School of Public Policy, established in 1929, is one of the premier schools of its kind in the nation. Through a time-honored commitment to public service, a legacy of strong connections to professional leaders and a world-renowned research portfolio, the school’s faculty, students and alumni work to improve the quality of life for people and their communities worldwide. The USC Price School of Public Policy is at the forefront of research and teaching on today’s major issues, including: housing and real estate markets, environmental sustainability, health care, economic development, transportation and infrastructure, governance and leadership, nonprofits and philanthropy, civic engagement, immigration and the impact of terrorism.