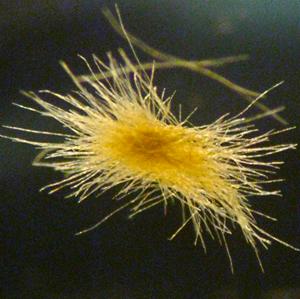 Climate change may be weeding out the bacteria that form the base of the ocean’s food chain, selecting certain strains for survival, according to a new study.

In climate change, as in everything, there are winners and losers. As atmospheric carbon dioxide levels and temperature rise globally, scientists increasingly want to know which organisms will thrive and which will perish in the environment of tomorrow.

The answer to this question for nitrogen-fixing cyanobacteria (bacteria that obtain energy through photosynthesis, or “blue-green algae”) turns out to have implications for every living thing in the ocean. Nitrogen-fixing is when certain special organisms like cyanobacteria convert inert – and therefore unusable – nitrogen gas from the air into a reactive form the majority of other living beings need to survive. Without nitrogen fixers, life in the ocean could not survive for long.

“Our findings show that CO2 has the potential to control the biodiversity of these keystone organisms in ocean biology, and our fossil fuel emissions are probably responsible for changing the types of nitrogen fixers that are growing in the ocean,” said David Hutchins, professor of marine environmental biology at the USC Dornsife College of Letters, Arts and Sciences and lead author of an article about this research that appeared in Nature Geoscience on June 30.

“This may have all kinds of ramifications for changes in ocean food chains and productivity, even potentially for resources we harvest from the ocean such as fisheries production,” Hutchins said.

Hutchins and his team studied two major groups of nitrogen-fixing cyanobacteria: Trichodesmium, which forms large floating colonies big enough to see with the naked eye and makes vast “blooms” in the open ocean; and Crocosphaera, which is also very abundant, but is a single-celled, microscopic organism.

Previous research showed these two types of cyanobacteria should be some of the biggest “winners” of climate change, thriving in high CO2 levels and warmer oceans. However, those previous studies only examined one or two strains of the organisms.

That’s where USC’s unique resource comes into play – the university is home to a massive culture library of strains and species of the organisms assembled by USC Associate Professor Eric Webb.

Using the culture library, the team was able to show that some strains grow better at CO2 levels not seen since the start of the Industrial Revolution, while others will thrive in the future “greenhouse” Earth.

“It’s not that climate change will wipe out all nitrogen fixers; we’ve shown that there’s redundancy in nature’s system. Rather, increasing atmospheric carbon dioxide changes specifically which nitrogen fixers are likely to thrive,” Hutchins said. “And we’re not entirely certain how that will change the ocean of tomorrow.”

Photo: Colony of trichodesmium bacteria roughly the size of the head of a pin. (Eric Webb/USC)