Hijacking the double helix for replication 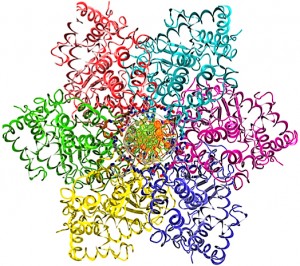 For years, scientists have puzzled over what prompts the intertwined double-helix DNA to open its two strands and then start replication. Knowing this could be the key to understanding how organisms — from healthy cells to cancerous tumors — replicate and multiply for their survival.

USC scientists believe they have solved the mystery. Replication is prompted by a ring of proteins that bond with the DNA at a special location known as “origin DNA.” The ring tightens around the strands and melts them to open up the DNA, initiating replication.

This all takes place at a nano level that is impossible to see with the naked eye. A strand of DNA is only about one nanometer in size — not even close to the width of a human hair which is roughly equivalent to 100,000 DNA strands.

The researchers made their discovery by studying SV40, a cancerous virus. The virus hijacked the DNA replication process with a ring of proteins called a “helicase” that mimicked the rings of proteins that prompt genetic replication in healthy cells.

The findings were published on Dec. 6 in the journal eLife.

“Understanding the mechanisms of origin DNA opening or melting allows us to learn this fundamental process of genetic duplication,” said corresponding author Xiaojiang Chen, a professor of biological sciences and chemistry at the USC Dornsife College of Letters, Arts and Sciences and director of the college’s Center of Excellence in NanoBiophysics. “The knowledge we have gained may be applicable for future intervention of this process to block the replication of viral pathogens and cancer cells.”

When the origin DNA melts, the double helix divides into separate strands, Chen explained. Those DNA strands then become the template for faithful duplication of other strands — a Xerox copy of their parental DNA. As soon as replication is complete, one double helix DNA now becomes two exact copies of the same double helix.

“DNA replication is critical for heredity and survival,” said Chen, who also is affiliated with the Norris Comprehensive Cancer Center at the Keck School of Medicine at USC. “The origin DNA’s opening is an essential step for DNA replication in our cells and for some tumor viral pathogens to replicate and spread.”

To prompt replication, the scientists used a helicase from a “Large Tumor Antigen” or Large T. The antigen comes from the SV40 virus linked to human cancers such as brain and bone cancers, mesothelioma and lymphoma. The six proteins from Large T comprise a “helicase” that mimics the structure of the healthy cells’ helicases.

The scientists obtained a 3-D view of the atomic structure of the helicase using X-ray crystallography, a technique for examining nano-biomolecules and their structures at the atomic level that has been refined over centuries. Chen said the images revealed that the proteins surrounding the DNA had attached to it, then tightened like a vice until the bonds between the two strands of the double helix broke — or melted — the origin DNA.

Although the scientists used a cancerous virus to study replication, healthy cells replicate in a similar way, Chen said.

Other co-authors were Dahai Gai, also of USC Dornsife, Damian Wang of the Keck School of Medicine at USC and Shu-Xing Li of USC Dornsife’s Center for Excellence in NanoBiophysics.

The study was funded by a National Institutes of Health grant (A1055926).

[Image caption: This ribbon diagram depicts a magnified view of genetic replication in the making, as a group of proteins surround the DNA strands. Each of the six proteins is in distinct color, with origin DNA in the center. Credit: Xiaojiang Chen, USC.]