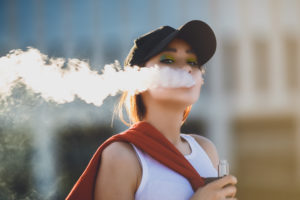 Vaping device companies are getting billions of eyeballs on their products and potentially influencing young adults with unrestricted advertising in music videos, an unregulated and relatively cheap promotional platform, a pair of USC studies show.

The studies were published today in Health Education & Behavior and in December 2020 in Nicotine & Tobacco Research. Their findings are concerning because vaping is associated with progression to “regular,” or combustible, cigarettes and acute lung injuries. At the same time, more young people are using e-cigarettes. Among 18- to 24-year-olds, the use of e-cigarettes increased from 5% in 2014 to 7.6% in 2018.

“We know that behaviors are learned and reinforced through the observation of others’ behaviors, which makes these music video product placements problematic,” said Jon-Patrick Allem, an assistant professor of research at the Keck School of Medicine of USC and principal investigator of the study.

“For example, the music video for ‘I’m the One’ by DJ Khaled featuring Justin Bieber contains 8.5 seconds of specific product placements and scenes of models using vaping pens,” he said. “This video alone has been viewed over 1.3 billion times on YouTube, delivering billions of impressions of vape pen product placement and use.”

Patricia Escobedo, doctoral student and lead author of one of the papers, noted that music videos viewed billions of times can be “socializing forces for young adults, molding views of what is normative, attractive and rewarding.”

The research sheds light on the extent and potential effectiveness of the practice, finding that young adults who self-reported exposure to e-cigarette product placement and imagery in music videos were more likely to report lifetime and current e-cigarette use compared to participants with no exposure.

The Tobacco Master Settlement Agreement of 1998 banned product placements for cigarettes and smokeless tobacco in television, music videos and motion pictures. However, no such restrictions apply to e-cigarette or vaping products.

Music video producers can easily extend their budgets by selling quick shots of products — or a shot of the product being used by a model — in the video, Allem said. It costs more to have the featured performer use the product, so it’s usually a background character.

“I’ve heard of quotes for $30,000 to put a product in a popular music video and then have those products also appear in the quick clips that are shared on platforms like Instagram,” Allem said. By comparison, a 30-second spot during Super Bowl 2020 cost about $5.6 million.

For the study in the journal Nicotine & Tobacco Research, the researchers compiled a list of all 285 songs with videos that appeared on the Billboard Hot 100 during 15 consecutive weeks in 2018. They then excluded fan-made or lyrics-only videos, narrowing the total to 180 videos.

The brand KandyPens appeared in two hip-hop videos (“No Brainer” by DJ Khaled, “Narcos” by Migos) and one pop video (“Alone” by Halsey). The scenes included female models using the products, exhaling vapor clouds and scenes with KandyPens packaging. In one scene, DJ Khaled uses a KandyPens device and blows an aerosol cloud toward the camera. Music videos with KandyPens product placements identified in the study period received 290 million cumulative views.

Survey connects music videos and higher likelihood of e-cig use

In the second study, published in the journal Health Education & Behavior, the researchers found that exposure to e-cigarette product placement or imagery in music videos was associated with a higher likelihood of lifetime and past 30-day e-cigarette use among young adults in California.

Researchers surveyed a representative sample of 1,280 18- to 24-year-olds through an online questionnaire between Aug. 19, 2019, and Oct. 17, 2019, to explore associations between self-reported levels of exposure to music with any vaping product placement or imagery and susceptibility to vaping use. Of those exposed to vaping in music videos, those under the age of 21 were more likely to report using the products than their older counterparts.

“The big takeaway from this line of research is that those under the tobacco purchasing age, or those under 21, were the most likely to recall exposure to music videos with product placement and e-cigarette use,” Allem added. “The next step in our research process is to tease out the exact impact or cause and effect of these marketing practices on young people.”

In addition to Allem, Escobedo and Majmundar, the other study authors included Jennifer Unger, Tess Cruz and Matt Kirkpatrick, all of the Keck School of Medicine; Erica L. Rosenthal of the USC Annenberg School for Communication and Journalism; and Camille J. Saucier of the Northwestern University School of Communication.