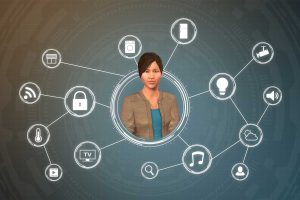 When it comes to buildings and their occupants, USC researchers see a failure to communicate, yet improved dialogue between the two can help smart buildings work better for a sustainable society.

In a new study, researchers found that subtle changes in design of virtual assistants results in behavioral changes that can help the environment. The researchers found people connect better with a computer-generated avatar who represents building management. They found that social banter between machine and people gets better results. The findings underscore how personal connections and social interactions key to human relations also foster cooperation between people and machines.

The study, “Establishing Social Dialog between Buildings and Their Users,” appears in the Dec. 27 International Journal of Human-Computer Interaction. It’s the latest study by USC scientists focused on the human-machine dynamic and is a product of convergent disciplines at USC, including engineering, communications and behavioral sciences. The study authors are from the USC Viterbi School of Engineering and the USC Institute for Creative Technologies.

Virtual assistants key to communication between people and smart buildings

Virtual assistants are as new as Alexa or Siri and as old as HAL 9000 in “2001: A Space Odyssey.” The proliferation of smart buildings laden with automated systems for heating, cooling and lighting are important to improve worker health and productivity, conserve energy and protect the environment.

“You can think of things like the computer interface on the Star Trek ship ‘Enterprise’ as closer to reality than science fiction,” said Gale Lucas, research assistant professor at the Viterbi School at USC and corresponding author of the study. “We’re beginning to explore where the line is between people and buildings that perform as machines. We are trying to get people to feel more comfortable and make smart buildings perform better.”

Americans spend 90 percent of their time inside buildings, either working or sleeping or shopping or studying. Comfort, quality of life, worker productivity and safety directly affect the operation of buildings.

According to the U.S. Green Building Council, buildings account for 39 percent of U.S. carbon dioxide emissions. In California, the state Air Resources Board (ARB) ranks the building sector as the second largest source of greenhouse gas emissions (GHGs), and has targeted the sector for an 80 percent emissions reduction by 2050. The ARB has identified behavior practices as an important influence for energy consumption in buildings.

Yet the promise of smart buildings often doesn’t match their performance. Despite automation, human actions inside four walls or office floors can compromise a building’s energy efficiency capabilities. Buildings work more efficiently when people inside cooperate.

“If a building spoke to you, it could ask for things that might help the environment, like ‘turn off lights’ or ‘open windows’ or ‘save energy,’” Lucas said. “If the building were to ask people, ‘why don’t you do something environmentally-friendly?,’ we might get people to engage in healthy behaviors for themselves and the environment.”

To accomplish that goal, people and buildings need better cooperation. People need to trust the technology while computers need to use proven behavioral change interventions to nudge people to act. The USC research explored how best to accomplish this.

The scientists selected 200 participants, mostly college students, of mixed race and ethnicities. First, subjects were exposed to an office setting using virtual reality, followed by a real office setting for a smaller group of participants. The researchers crafted pro-environmental messages for a virtual assistant, an agent nicknamed Ellie, to ask questions, such as “If I open the blinds for you to have natural light, would you please dim or turn off the artificial lights?” They then observed if participants cooperated with these pro-environmental requests.

Who is involved in communication between people and smart buildings?

Replicating similar previous research by the USC team, the results showed that people responded better when Ellie, the virtual human, acted on behalf of the building manager, rather than when she performed as a personification of the building.

People were also more cooperative when the messages were part of a social dialogue rather than monologue. This element proved critical, the study indicates. For example, subjects responded better to small talk, such as, “Hi, how are you? …. What’s your name?… I’m glad to see you.” Social dialogue helped overcome bias against the avatar. The researchers found people responded well to Ellie when she used social dialogue, regardless if she functioned as the face of the building or an agent of the building manager.

According to the study, “Including a social dialogue may have helped to overcome the difference between personas by making the building persona more relatable. Indeed, people associate monologue with strangers and dialogue with closer relationships.”

The scientists noted similar results whether study participants operated in an actual office or virtual reality simulation. They also found that when they repeated the experiment one week later, the subjects responded more positively, suggesting familiarity due to repeated interactions helped.

“We are trying to build a relationship between buildings and their users, akin to a friendship, so users are empowered to improve individual performance as well as building performance,” said Burcin Becerik-Gerber, associate professor of engineering in the USC Viterbi School.

The findings demonstrate that design decisions that account for the human-machine dynamic will be important to achieving the potential for smart buildings.

The study was funded by a grant from the National Science Foundation (1548517).